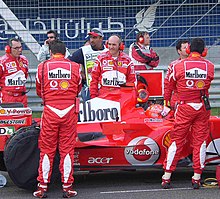 Logo of the Marlboro Classics clothing line used until 2013 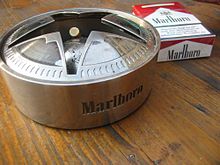 Marlboro ashtray and pack of cigarettes

Marlboro is a cigarette brand of Philip Morris International (or in the USA by Philip Morris USA , a subsidiary of the Altria Group ). It has been the world's best-selling cigarette for decades and was once one of the ten most valuable brands in the world. The brand image of “freedom and adventure” carried by the Marlboro Man achieved great fame .

Philip Morris, a British tobacco trader and cigar importer, was the namesake for Philip Morris & Co., Ltd., founded in 1902 . From 1924 Marlborough was sold as a "woman's cigarette" with the slogan "Mild As May" (Mild as May). The company was named after Great Marlborough Street , which is located in London.

Shortly before the Second World War , the brand faltered and was briefly withdrawn from the market. After the war, Camel , Lucky Strike and Chesterfield were the only cigarettes that were widely used around the world.

In the 1950s, Reader's Digest published a number of articles linking smoking with lung cancer. Philip Morris responded by producing filter cigarettes. The new Marlboro with a filtered end were launched in late 1955. The designer Frank Gianninoto had designed the characteristic red and white Marlboro packaging, the Leo Burnett advertising agency came up with the idea of ​​relying on a male image and "emotionalizing the brand", which only became the rule for consumer products much later. However, it was already known that cigarettes in red packs sold best; the favorite was the red and white striped pack.

In the 1960s, Philip Morris developed the advertising concept for Marlboro Country and established the brand's tough male cowboy image. Through this campaign, Marlboro quickly gained huge market shares: Sales increased by fifty-fold in the first eight months of the campaign. However, critics attribute this economic success to the fact that from 1965 ammonium compounds were added to tobacco in order to improve nicotine absorption and thus increase the effect and the degree of dependence. In Germany, the Tobacco Ordinance does not allow ammonium compounds to be added to cigarettes. Current research results contradict the thesis that an increased ammonium content leads to better nicotine absorption (see tobacco additives ).

To this day, Marlboro uses the advertising with the cowboy with great success - regardless of the fact that Wayne McLaren, one of the models appearing as Marlboro Man , died in 1992 as a result of lung cancer.

Marlboro is also known as a sponsor - for example in motorsport with the Formula 1 team Scuderia Ferrari Mission Winnow and the MotoGP team Ducati Marlboro .

As early as 1971 Marlboro placed its products in Soviet films, among others in Старики-разбойники (German: Stariki-razboyniki) or Iwan Wassiljewitsch Changes Profession (1973).

In the Western world , the Marlboro brand was incorporated into the 1979 film Superman II - Alone Against All for the first time in commercial form as a targeted product placement . For this, the cigarette manufacturer Philip Morris negotiated a contract with Pinewood Studios . Accordingly, a film sequence (scenes 333 to 341) was incorporated in which Superman was hurled in close-up against a delivery van specially labeled for this film with Marlboro . In reality, however, there were no delivery vans with such labels.

The products sold under the Marlboro brand in Germany include Marlboro Red, Intense, Flavor Mix (formerly "Medium" / MX4 ​​Flavor), Gold (formerly " Lights ", introduced in 1983), Gold Advance, Menthol (now Blue Fresh), White Menthol (now White Fresh), Blend 29 (free of additives according to the packaging), Flavor Note (formerly “Silver”) and WIDES. Some of these products are also offered in excess lengths of 100 mm. In Germany and Switzerland, the trade also sells cigarettes in soft packs. Moreover, it is fine cut available for self turning.

The company sells various merchandising items through licensees , such as lighters, ashtrays, sunglasses and other accessories, which are sometimes given away to the target group as part of advertising campaigns. The Marlboro Adventure Team Adventure Camp, which was started in 1983 for advertising purposes and for which the participants had to apply, had its own clothing and accessories collection.

Philip Morris launched a sportswear line called Marlboro Country Store back in the 1970s . In 1984 Philip Morris granted a license for clothing under the brand name Marlboro Leisure Wear to the Italian textile manufacturer Marzotto (from 2005: Valentino Fashion Group ) through its own licensing company International Trademarks Inc. (ITI) . In 1987 the brand name was changed to Marlboro Classics . Under the label, men's and women's leisure fashion was successfully offered in the medium price segment. Philip Morris used this brand transfer - similar to Camel with Camel Active - to subliminally promote the cigarette brand positively in areas where no tobacco advertising would have been allowed. The textile manufacturer wanted to emphasize the connection to the cigarette brand as little as possible. In 2009, therefore, the name was changed to MCS (with the subtitle Marlboro Classics ). In 2011, MCS sales were around 125 million euros. There are over 200 independent MCS stores worldwide (in Germany in Berlin, Dresden, Hanover and Munich) as well as more than 450 shops-in-shops in department stores and chain stores (in Germany Wöhrl ) in 42 countries. From 2007 the licensed brand MCS Classics belonged to the British subsidiary Permira after a sale by Marzotto . Philip Morris ended the MCS license agreement with Permira at the beginning of 2013, so that Permira sold its MCS shares to the British investment company Emerisque Brands, which also includes former sub-brands of the Moncler group, in the same year . Since then, the clothing line has operated independently of Marlboro and Philip Morris under the company name MCS Cavaliere Srl The women's fashion division has been discontinued. In South Africa there is a clothing line for men under the name 'Marlboro Originals' of the Fraser and Company Ltd .