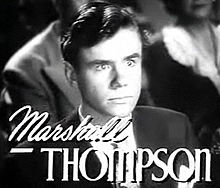 Thompson had his first tiny role in the 1944 comedy Henry Aldrich, Boy Scout . In the following years he worked at Universal Pictures and Metro-Goldwyn-Mayer , where he was often used in the role of the friendly "boy next door" at a young age. He played a major role in 1949 in William A. Wellman's war drama Kesselschlacht , in which the Battle of the Bulge is discussed. He is also known for his participation in the two science fiction horror films Ungeheuer ohne Faceless and It! The Terror from Beyond Space from 1958, in which he played the main role.

Thompson became world famous thanks to the veterinarian he played in the television series Daktari (an adapted translation from English “Doctor” in Swahili ). Marsh Tracy in Africa . The series was shot between 1966 and 1969 and has been one of the most popular series of the early 1970s since it was first broadcast in Germany in 1969 . A total of 89 one-hour parts were broadcast. In the 1960s, Thompson also tried his hand at writing and directing, directing the war comedy A Yank in Vietnam and four episodes of the Flipper series . In the Daktari previous movie Clarence, the cross-eyed lion and the series George , in which he played the lead role between 1972 and 1974, Thompson was involved as a screenwriter. Thompson's last minor role was in 1991 in the action drama McBain .

Marshall Thompson died of heart failure in 1992 at the age of 66. He was married to actress Barbara Long , sister of actor Richard Long , after a romance with Elizabeth Taylor from 1948 until his death . He left a daughter, Janet.