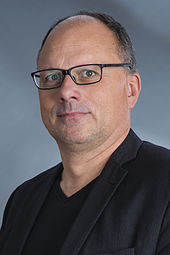 Matthias Güldner (born August 31, 1960 in Mannheim ) is a German politician ( Bündnis 90 / Die Grünen ). He is a member and was parliamentary group leader of his party in the Bremen citizenship .

Güldner studied Political Science , History and Romance Studies at the University of Heidelberg and graduated with a Magister Artium - MA. He received his doctorate in political science from the University of Bremen . After that he was a research assistant at the Institute for Tropical Hygiene and Public Health at Heidelberg University. He was parliamentary advisor to the Bündnis 90 / Die Grünen parliamentary group in the state parliament of Baden-Württemberg . He later worked as a consultant at the British children's charity Save the Children in London.

Güldner finally became head of the department for migration and integration of foreigners at the Bremen Senator for Culture and Foreign Integration and later at the Senator for Women, Health, Youth, Social Affairs and Environmental Protection.

He lives in Bremen- Findorff and has five children.

Güldner was district board spokesman for Bündnis 90 / Die Grünen as well as spokesman for the Green Alternative University List (GAUL) in Heidelberg and was temporarily a member of the Diet Commission of the Bremen Greens .

On June 28, 1999 he became a member of the Bremen citizenship. From 2007 to July 2015 he was chairman of the Greens group; Maike Schaefer succeeded him in this position. He is represented in the parliamentary control commission , in the temporary committee for the amendment of the state constitution and in the constitution and rules of procedure committee.

He did not run again for the Bremen state election in 2019 .

In July 2009, Güldner summarized his position in a guest commentary in the newspaper Die Welt . He stated that the dispute over the Internet bans would not revolve at its core around the fight against child pornography. From his point of view, it is rather "tough to define power in times of the virtualization of the world". In his opinion, the supporters of this virtualization fought “with highly effective means for the legal freedom of their space”. From Güldner's point of view, anyone who wants to interfere in their illusory world will be “bitten off with mass petitions at the click of a mouse”. Güldner described the arguments of the opponents of the legislative resolution as a “trend” and saw no potential for illegal misuse of the technical prerequisites it created. From Güldner's point of view, the “ignorant argument” against web blockades cannot be explained. Güldner accused opponents of the Internet blocks, who questioned their effectiveness and mentioned the possibility of circumvention, of having “probably tweeted out their brains”. Otherwise other legal regulations that could be circumvented could also be abolished. Güldner also stated:

"Anyone who thinks first-person shooters for entertainment, Facebook for real life, whoever thinks Twitter for real politics, seems to assume that violence does not claim victims in the real world."

Some members of Güldner's regional association reacted to these statements by leaving the party. The federal executive of the Greens distanced itself in a statement from Güldner's statements. He found that Güldner's contribution not only contradicted the green program situation, but also adopted a tone that was not acceptable from the perspective of the Greens to those who were committed to a free Internet. The federal board of the Green Youth criticized in an open letter to Güldner under the heading "The ignorance of Matthias Güldner", Güldner's "unrealistic polemics" was "defamatory" and "ignorant".

In the Bremerhaven social fraud affair involving the SPD politicians Selim and Patrick Öztürk, Güldner's wife, who was also an active member of the Greens, was suspected of stealing data.