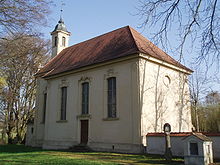 Maximilianskirche, west and north side with the escort column

The Maximilianskirche Ellingen , also called Maxkirche or Fish Church, is a small hall church in the early Rococo style built by the Teutonic Order in the Middle Franconian country town of Ellingen . 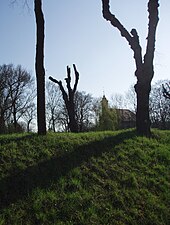 Crucifixion group on the east side of the Maxkirche

The church is just outside of Ellingen, around 500 m west of the town center. It is located on the road leading from Ellingen to the Residenz and past the Brühltor , which was destroyed in World War II , to the west towards Stopfenheim . The connecting road to Schmalwiesen leads past to the west . The Swabian Rezat runs to the east . The name "Fish Church" goes back to the former fish ponds surrounding the castle, which are now meadow grounds.

The previous building is first mentioned in 1519 in the will of Dr. Georg Länntsch , canon of St. Stephan and former rector of the University of Vienna , a native of Ellingen, mentioned ("... ad capellam sancti Maximiliani ..."). As a representation on the coat of arms calendar of the Teutonic Order from 1719 shows, the chapel was a low, simple building with a tower in the west; it was furnished in baroque style.

The present church was built in 1733/34 under the Ellingen Landkomtur of the Teutonic Order, Carl Heinrich Freiherr von Hornstein , presumably by the Teutonic Order building director (and plasterer ) Franz Joseph Roth , who came from Vienna and has been active in Ellingen since 1724, and consecrated in 1734 .

It is a small, three-bay hall church in the early Rococo style with a narrower choir in the east and a low sacristy attached to the east . A roof turret is placed on the choir . On the eastern outside of the sacristy, facing Ellingen, there is a stone crucifixion group under a cornice in a niche . There was originally a cemetery in front of the west side of the church.

Northwest of the church is a 17th century escort column with the coats of arms of Landkomtur Volpert von Schwalbach (1569–1602) and Grand Master Johann Caspar von Stadion (1627–41), which marked the sovereign limit of the Ellingen Landkomtur against the Margraviate of Ansbach . A small chapel next to it was built around the year 2000.

The church has a uniform baroque interior. It is consecrated to St. Maximilian; its attributes, sword and laurel wreath, are carried by angels in the choir. The ceiling frescoes, which, surrounded by grid fields, show faith, love and hope in allegorical figures as well as angels and groups of putti , possibly originate from the Augsburg artist Johann Georg Bergmüller , who painted the side altar paintings of the Eichstatt Guardian Angel Church from 1730 to 1733 ; von Hornstein had donated a side altar of the Guardian Angel Church. The coat of arms of Hornstein is attached above the choir arch of the Maxkirche, as well as in an arch on the east facade below the ridge turret.

On the baroque two-column high altar (around 1730, from the previous church) stands a Madonna by the Ellingen sculptor Leonhard Meyer . The upper image shows Saint Dominic looking at the cross. The two figures of saints Anna and Joachim, which stand in two shell niches on the east side of the choir, as well as the crucifixion group on the eastern outer wall, presumably come from Johann Wagner, the sculptor of Maria Immaculata on the portal pillar of the Ellingen Castle Church. The tabernacle on the high altar is from the late Rococo. The two side altars were created around 1670 and also come from the previous church; the left shows the Holy Family in the altarpiece, the right - probably added later - Saint Wendelin . The pulpit on the southern choir wall was made by the court carpenter Dominikus Biber (around 1750). The death of St. Maximilian is depicted on the expansive curved gallery .

On the side walls are four oil paintings painted around 1770 by the Eichstatt artist Johann Chrysostomus Winck , which depict scenes from the life of St. John of Nepomuk ; this was canonized shortly before the new building of the Maxkirche (1729).