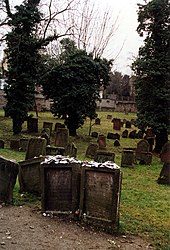 Meir, who came from a family of eminent Talmudic scholars, studied in Würzburg , Mainz and Paris . In Paris in 1242 he witnessed the public burning of Jewish writings, the Paris Talmud burning . His funeral song about it is sung in the synagogues to this day on Tischa beAv (9th Av), the day of commemoration for the destruction of the Jerusalem temple . After his studies, Meir lived in Rothenburg ob der Tauber for more than 40 years , where he founded a yeshiva with 21 rooms, a classroom and other facilities near Kapellenplatz, which attracted students from all over Europe. During his time in Rothenburg, Meir became one of the most important authorities on halachic legal issues, more than 1500 of his responses have been preserved. Only after the death of his father did he return to Worms around 1276.

When in 1286 King Rudolf I again imposed high taxes on the Jewish communities as chamber servants ( servi camerae ), there was a wave of emigration to Palestine . Meir saw the emigration as essentially a spiritual event and joined the movement with his family. Even before crossing the Alps, he was denounced by an apostate as the instigator of emigration, which the authorities viewed as a financial threat, arrested by Count Meinhard von Görz , handed over to Rudolf I and imprisoned in Ensisheim . The negotiations for a release were led by Meir's student Ascher ben Jechiel , but were unsuccessful despite an offer of 23,000 marks, as Meir forbade a payment himself in order not to create a precedent for the arrest of other rabbis. Meir died in captivity in 1293. Even the body was held back to extort money. It was not until 1307 that Meir's body could be released by the Frankfurt merchant Alexander ben Salomon Wimpfen , who sacrificed his entire fortune for more than 20,000 pounds of silver. He himself transferred the body to Worms, where, at Meir's request, it was buried in the Jewish cemetery, Heiliger Sand , on September 8, 1307. According to the old inventory, the tombstone bears the number 88, according to the numbering of the Salomon Ludwig Steinheim Institute the number 794. Alexander ben Salomon Wimpfen, who died in the same year, 1307, was buried next to it.

The tombstones of Meir von Rothenburg and Alexander ben Salomon Wimpfen on the Holy Sand in Worms are visited by visitors from all over the world.

In the 17th century, Juspa Schammes included the story of Meir von Rothenburg and Alexander ben Salomon Wimpfen in his collection of stories about the Jewish community in Worms.

In his memory in Rothenburg ob der Tauber the “Rabbi-Meir-ben-Baruch-Gärtchen” with the following dedication plaque is laid out at the Judentanzhaus :

“Rabbi Meir Ben Baruch von Rothenburg - one of the most important Talmudic scholars to commemorate. Born around 1220 in Worms, he lived and worked from around 1250 to 1286 in the synagogue and the Talmud school, which stood on this square, the first Jewish quarter of Rothenburg. He died in Ensisheim in 1293 and was buried in Worms in 1307. The synagogue and Talmud school were converted into a Marienkapelle and a lake house in 1404. The Lady Chapel was demolished in 1805. "

At the corner of Galgengasse and Judengasse in Rothenburg o. T. there is a private museum that presents the history of the medieval Jewish community and Rabbi Meir ben Baruch.