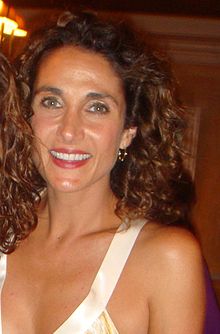 The youngest of three daughters of an insurance agent and a housewife was born and raised in Akron. She spent most of her time in her parents' candy store. She developed her love for musicals and theater , especially for the works of Gwen Verdon and Chita Rivera , as a child. She performed with her sisters in her Greek community and when she was eight she had her first role in the play Tom Sawyer . As a teenager she continued to perform in musical and dance productions and worked with various ensembles in New York City for several summers .

In 1985 Kanakaredes graduated from high school and then moved to Ohio State University to study music, dance, and theater. She later moved to Point Park College , where she was given the opportunity to appear in commercials and theater productions at the Pittsburgh Playhouse and the Pittsburgh Public Theater . After graduating magna cum laude with a Bachelor of Fine Arts degree in Musical Theater / Acting , she went to New York to start her career in theater and musical productions on Broadway . Her first role she got in the play state of the art . She was later discovered by an agent from the William Morris artist agency and got a role in the television series Springfield Story . Already this role gave her a considerable fan base and a lasting impression with the producers, which earned her appearances on television series such as New York Cops - NYPD Blue , New York News - Hunting for the front page or Leaving LA . She became best known in 1999 for her role as Dr. Sydney Hansen in the television series Providence , which earned her a TV Guide Award .

Kanakaredes' rare appearances in movies include a supporting role as Samuel L. Jackson's versatile secretary in the thriller Deadly Christmas (1996), an appearance as Robert De Niro's Girlfriend in Fifteen Minutes of Fame (2001), the role of Athena in Percy Jackson - Thieves in Olympus (2010) and alongside Dwayne Johnson in Snitch - A Risky Deal (2013).

From 2004 Kanakaredes was in the television series CSI: NY , an offshoot of the series CSI: Vegas , as Detective Stella Bonasera . She left the series after the sixth season.

Kanakaredes lives with her husband, Peter Constantinades, to whom she has been married since September 6, 1992, in the San Fernando Valley near Los Angeles . She has two daughters.