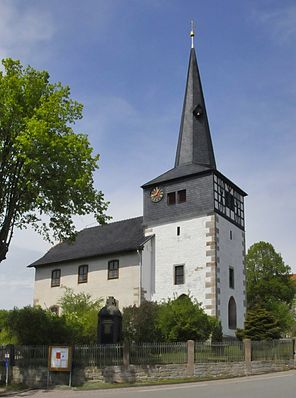 Metzels is a district of the town of Wasungen in the Schmalkalden-Meiningen district in Thuringia .

Metzels is on the north-western edge of the Dolmar on a high plateau.

The place was first mentioned in 1228. It originally belonged to the Fulda Monastery . The place came in the first half of the 15th century to the Henneberg office Wasungen , which was in the Franconian Empire from 1500 . From 1680 it belonged to the Duchy of Saxony-Meiningen . Until the division of the county Henneberg in 1660, jurisdiction was still on the centering running Meiningen, only then the place came to court Wasungen.

According to the chronical tradition of the 16th century, a battle in the war between the Counts of Henneberg and the Bishopric of Würzburg is said to have been fought near Metzels in the year 1228 , in which Count Heinrich von Beichlingen and Heinrich II. Von Sternberg as allies of the Bishop of Count Poppo VII von Henneberg were defeated after they had been taken by surprise from Meiningen through the Wallbachgrund.

On the night of 14 February 1945 was Halifax bomber of the Royal Air Force shot down with the identifier MZ803 (KN-G) by a German night fighter. Parts of the machine came down on the territory of the municipality of Metzels.

On January 1, 2019, the Metzels community was incorporated into the city of Wasungen. She belonged to the administrative community Wasungen-Amt Sand .

The following parts of this section seem since 2014 is out of date to be : election results of the local elections please renew
Please help with to the missing information research and insert .

The council from Metzels consisted of 8 councilors.

The honorary mayor Herbert Kühlhorn was elected on June 27, 2004.

Districts of the city of Wasungen