Oepfershausen is located northwest of Meiningen , in the Vorder Rhön , at the foot of the Hahnberg .

The neighboring communities were most recently the communities of Unterkatz and Oberkatz in the south, Wahns in the east, Schwallungen in the northeast , Friedelshausen in the north and the town of Kaltennordheim behind the Hahnberg in the west .

The place was first mentioned in 1183. He was influenced significantly from 1330 to 1731 by the noble family of bison and from 1595 to 1711 by the family of Herda. The two competing sexes had two castles and four manors in the village. After Herda died out in 1711, the Auerochs acquired their property, and after the Auerochs died out only 20 years later with the death of Georg Friedrich von Auerochs in 1731, the entire property fell to the sovereign, Duke Karl Friedrich von Sachsen-Meiningen , and became one Domain. Today the manor house is an artist's house. The place was originally part centering Friedelshausen that around 1350 in the hen bergischen Office sandy opened. From 1825 to 1827 the administration of the Saxon-Meiningischen Amt Sand was in place.

Oepfershausen was affected by the persecution of witches from 1598 to 1633 : 22 women and four men got into witch trials , 14 people were executed, and one woman was sentenced to expulsion from the country. The first victim in 1610 was Margaretha Heide.

On January 1, 2019, the municipality of Oepfershausen was incorporated into the town of Wasungen, which belongs to the administrative community Wasungen-Amt Sand .

The honorary mayor is Mario Wilk. 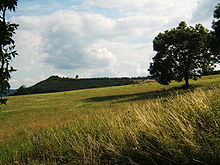 Districts of the city of Wasungen