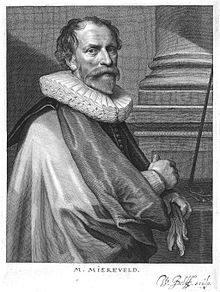 Mierevelt studied under Anthonie van Montfoort (called Blocklandt ) in Utrecht (1579–83), quickly established himself as a successful portrait painter and ran a large studio . He became court painter to Prince Moritz of Orange , whose most important portraitist he became. Despite his connection to the Anabaptists , van Mierevelt was also in the service of Archduke Albrecht VII of Austria . He painted historical and mythological scenes in an elegant mannerist style. Anthonie Palamedesz was among his students .