The Military Order of Saint Henry ( lat Ordo Divi Henrici Imperatoris ) was founded on October 7, 1736 by Elector August III. Donated by Saxony in the Hubertusburg hunting lodge and awarded exclusively to officers as a reward for purely military, warlike services.

Breast star to the Grand Cross

Knight's Cross: obverse (above), lapel (below)

Its name goes back to the last German emperor from the Saxon princely house, Emperor Heinrich II. († 1024), who is associated with the Christianization of Central Germany and is venerated for his Christian knighthood.

The Order of St. Heinrich is the oldest Saxon knightly order of the Wettin dynasty (from 1806 of the Wettin royal dynasty). It was founded on October 7, 1736 by Elector Friedrich August II of Saxony (King August III of Poland) on the occasion of his 40th birthday in Hubertusburg as a military knightly order with dynastic influences. On September 4, 1768, the order was divided into three classes by the administrator of Saxony, Prince Xaver of Saxony (Grand Cross, Commander and Knight). On September 23, 1829, Friedrich August I gave the order an extension of its statutes in the form of 19 paragraphs as well as a further class, that of the commander II class. With the award of the statutes, the “St. Heinrichs Orden “the status of a real order. With the abdication of the last Saxon king in 1918, there were no further admissions to the order.

Originally the order was only donated in one class. After it was only sparsely awarded until 1807, it was re-established as the Royal Saxon Military Order of St. Henry after the Napoleonic Wars and was divided into three classes. On December 23, 1829, King Anton of Saxony added the commanders 2nd class and gave the order new statutes.

At the time of its establishment, the baroque order primarily paid tribute to military merits. With its revival in 1975, the order was primarily devoted to civilian goals. Donated as the highest honor for bravery of the Saxon dynasty, the old motto "Pietate et bellica virtute" was "Piety and martial bravery", after 1768 "Virtuti in bello" - "Bravery in war". In the 21st century, bravery is rather to be understood as action in the sense of protective support for the weak, the sick, those in need and generally those seeking help, as well as turning against opportunism. This can be seen in standing up for well-founded beliefs based on Christian values. In keeping with tradition, it is not permitted to apply in any way for admission to the Order.

The statutes of 1829 were essentially:

In modern times, after the abolition of noble privileges, the name is expanded by adding the order abbreviation, for the Order of St. Heinrich this is ODHI ("Ordo Divi Henrici Imperatoris"; "Order of Emperor Henry the Second")

With the death of the founder, Saxony's ties to Poland also ended and Franz Xaver of Saxony , who ruled as administrator for the minor Friedrich August , gave the order new statutes on August 25, 1768. From this point on, the sign of the order was an eight-pointed golden cross with a wide white border and green diamonds between the four wings. Emperor Heinrich II is written on the yellow background of the round central shield in imperial decorations; on the blue border of the shield around the picture, namely since the electoral prince of Saxony was elevated to king in 1807, the words FRID. AUG. DG REX SAX. INSTAURAVIT .

The reverse of the central shield shows the Saxon coat of arms and the inscription VIRTUTI IN BELLO in blue , above the cross a golden royal crown. The Grand Cross was carried on a sky-blue ribbon with a lemon-yellow border over the right shoulder to the left hip; next to an eight-pointed golden breast star (with the front of the medal in the middle and surrounded by the words: VIRTUTI IN BELLO ) on the left breast, while the first class commanders have a small breast star next to the cross around their necks, the second class commanders only the cross around their necks, the knights wear the same on their chests.

A special grand cross was created for Kaiser Wilhelm II .

The military St. Heinrichs Medal for NCOs and men is attached to the order. It was awarded on March 17, 1796 by Elector Friedrich August III. was donated in two stages - gold and silver. It shows the portrait of the founder looking to the left with the inscription FRIEDRICH AUGUST CHURFURST ZU SACHSEN . After the increase to a kingdom, the inscription was from 1807 FRIEDRICH AUGUST KOENIG V. SACHSEN . On the lapel the three-line inscription MERIT UM DAS FATHERLAND . Weapons trophies can be seen underneath and everything is enclosed by a laurel wreath tied together at the bottom .

As the highest military honor of the Kingdom of Saxony, all holders of the order and the holders of the medal in gold were awarded a monthly honorary salary , which was paid after the end of the monarchy into the years of the Federal Republic of Germany in the amount of DM 50.

Based on the documents received from the formerly royal Saxon State Chancellery, the following award numbers result for the individual periods:

In addition, during the First World War, the aforementioned knights : 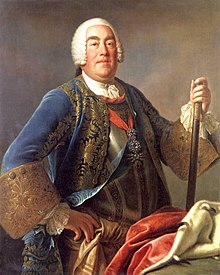 Grand Master of the Order

In Munich, Friedrich Christian von Sachsen, together with his sons Maria Emanuel and Albert , other representatives of the Saxon nobility , founded the chapter of the Royal Saxon Military Order of St. Henry, the Dresden Association and the Landsmannschaft Sachsen - Kreisgruppe München on 30. January 1961 the study group for Saxon history and culture eV Munich , which was to become one of the largest Saxon associations in Germany by 1990.

Since 1990, the Military Order of St. Heinrich has been gathering again on Saxon soil for annual meetings. The St. Heinrich Orden eV Bamberg was founded in 1985 in order to revive the spiritual content of the order and to reduce it from the emphasis on martial merits to the fulfillment of moral ideals and duties, which meets annually in Bamberg and another (changing) German city, which has a relation to former Heinrichs knights. The motto of the order was changed in 1985 from VIRTUTI IN BELLO to PRO PIETATE ET VIRTUTE . On September 25, 2010, Prince Alexander of Saxony, Duke of Saxony, assumed the presidency of the order.