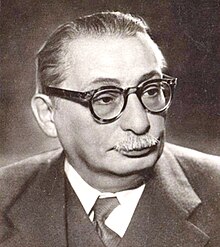 Although Moša Pijade was a Sephardic Jew , he saw himself as a Serb . From 1906 to 1910 he studied painting at the art academies in Munich and Paris. From 1913 to 1915 he was a teacher in Ohrid. During the First World War he worked as a war reporter and represented Serbian nationalist theories. After the First World War, he joined the Communist Party of Yugoslavia and became one of its leading figures. For a short time he was the publisher of some communist magazines. After the Communist Party was banned in Yugoslavia , he was arrested in 1925 and imprisoned until 1939. He met Josip Broz Tito in Lepoglava prison (Croatia) . In prison he and Rodoljub Čolaković translated several Marxist classical works, including a. Marx's "Capital" and "Communist Manifesto". After his release he retired to Belgrade, was arrested again in early 1941 and deported to a camp near Bileća , where he saw the beginning of the war in Yugoslavia. Released from custody, he joined the partisan resistance movement around Tito.

During the Second World War he belonged to the closest advisory staff of the partisans to Marshal Tito and was a member of the Central Committee and the Politburo of the CPJ . In Montenegro he became the commander of the local partisans and acted relentlessly against the local Chetniks and their families, which is why the CPJ felt compelled to withdraw him from this post. In the meantime, after the break-up of Yugoslavia, the archives of the State Community of Serbia and Montenegro have also found documents in Moše Pijade's estate that contain a list of the “concentration camps for the German population”. Whether Moše Pijade was causally related to the concentration camps cannot be regarded as proven.

Statue of Antun Augustinčić in Zagreb

In socialist Yugoslavia , Moše Pijade was proclaimed the “hero of the people”.

From 1945 he was a member of the Politburo of the CPY and at the same time deputy chairman of the Presidium of Skupština . 1953–54 he was one of four vice presidents of the Federal Executive Council . There he resigned on January 30, 1954 to become President of Parliament (Skupština).

In addition to his political activities, he also appeared as an artist, art critic, translator and publicist. Among other things, he translated Karl Marx 's Capital into Serbo-Croatian .

In 1942, Moše Pijade came up with the idea of ​​an autonomous Serbian Krajina in Croatia to protect the Serbs there from persecution. This proposal was rejected by the CPJ. Instead, the Serbs of Croatia became the second national people after the Croatians (this status was revoked in 1991 by Franjo Tuđman ).

In 1943 he founded Tanjug , the national press agency of Yugoslavia, now Serbia .