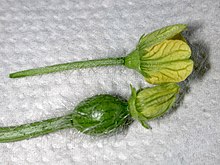 Male (top) and female flowers of the watermelon ( Citrullus lanatus ).

Monözie ( ancient Greek μόνος mónos "alone", "only" and οἰκία oikia "house") or monoeye , is the presence of female (carpenter, pistillate) and male (staminate) flowers on a plant specimen in seed plants. The flowers are unisexual, so either have only (male) stamens or only (female) carpels . The sexual organs of the plant are spatially separated ( diclinic ). The whole plant is hermaphroditic .

In the case of gametophytes , monözie denotes that male and female sexual organs occur, in the case of algae and fungi on a clone .

The opposite of monocyte is diocyte , the mixed form is the subdiocyte .

Monocular seed plants produce unisexual flowers on a plant. However, they can change their gender relatively easily. This happens through genetic modification of their male-sterile genes or the female-sterile genes, or through environmental influences.

Mostly male and female flowers are arranged on the plant according to a certain scheme. In most sedges ( Carex ) the female flowers or spikelets are below (proximal) and the male above (distal).

In many cases, the monocy was probably the starting point for the evolution of the diocese . In the case of cultivated plants , however, in some cases monoecious varieties were bred from the originally dioecious species, for example the grapevine Vitis vinifera and the hemp ( Cannabis sativa ). This avoids the economic disadvantage of having to plant unproductive male plants.