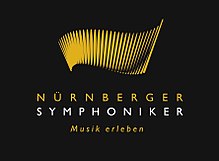 Logo of the Nuremberg Symphony Orchestra

The Nuremberg Symphony Orchestra is a private, non-profit symphony orchestra from the Nuremberg metropolitan region in Bavaria. The orchestra was founded together with its sponsoring association on June 1, 1946, is institutionally sponsored by the Free State of Bavaria , the City of Nuremberg and the District of Middle Franconia , and supported by sponsors from the business world in concert projects. The main sponsor is the Sparkasse Nürnberg . 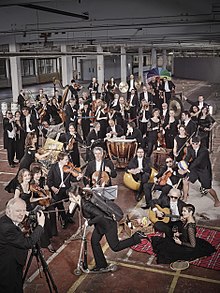 Every year the concert orchestra of the European Metropolitan Region Nuremberg has around 200,000 listeners at around 100 musical events of various kinds. At symphonic concerts in the Nuremberg Meistersinger Hall, the focus is on a classical-romantic repertoire. In its series in the music hall in the congress hall , the orchestra plays cross-genre projects from pop, jazz, film and literature. In December there are Christmas Advent concerts with festive baroque music during the Nuremberg Christmas market . During the summer season, the orchestra plays in the Serenadenhof and at Europe's largest classical open air in Nuremberg's Luitpoldhain with more than 60,000 visitors.

The orchestra also gives age-appropriate and interactive children and youth concerts. In cooperation concerts with MUBIKIN (musical education for children and young people in Nuremberg), children sit next to the orchestra professionals . In the cooperation projects Klasse.Im.Puls, young people who are particularly worthy of support make music on stage. The orchestra was awarded the Paula Maurer Prize in 2012 for the special project “Experience Classical Music - Children Play for Children” as part of the “Symphony Orchestra in the Classroom” . In addition, new concert formats such as offers for people with dementia are on the program.

Recordings are made regularly for Bayerischer Rundfunk and various CD labels.

The Nuremberg Symphony Orchestra is an important partner for choirs; for example the teachers' choir in Nuremberg, the Hans Sachs Choir and the Nuremberg Philharmonic Choir.

The orchestra made numerous international guest appearances and gave concerts, for example, in Vienna, Prague, Milan, Japan and China.

Entrance to the music hall of the Nuremberg Symphony Orchestra

Shortly after the end of the Second World War, Kapellmeister Karlhans Appel and several musicians founded the Franconian State Orchestra and the supporting association of the same name on June 1, 1946 . In 1963, which was Frankish Landesorchester in Nuremberg Symphony renamed. At that time, however, the association kept its name, Franconian State Orchestra . Since January 2020 it has been operating under the name Nürnberger Symphoniker eV . The first chairman has been Dirk von Vopelius, chairman of the supervisory board of Schuster & Walther IT-Gruppe AG and director of the cultural foundation of the Nuremberg Chamber of Industry and Commerce for Middle Franconia since June 2018.

The orchestra is classified as B within the German tariff system for cultural orchestras.

The seat of the orchestra has been the congress hall on the former Nuremberg Nazi party rally grounds since 1963 , which, in addition to the administration, also houses the rehearsal hall of the orchestra and the serenade courtyard. The rehearsal hall was expanded in 2008 to a new concert hall with almost 500 seats, temporarily used by the Nuremberg theater until 2010 and has been available to other organizers in addition to the Nuremberg Symphony Orchestra since 2011. Since 2011 it has been called the Music Hall in the Congress Hall .

The Friends of the Nuremberg Symphony Orchestra was founded in October 2001 to open up new financing options for the orchestra, which is managed under private law.

In February 1993, the Nuremberg Symphony Orchestra received the Grammy Award in the Best Pop Instrumental Performance category for the recording of the main theme of the television series “Beauty and the Beast” . The orchestra has been recording film soundtracks since the 1950s ; including music by Miklós Rózsa for the films “ Quo Vadis ” and “ Ben Hur ”.

As the first symphony orchestra in Germany, the Nuremberg Symphony Orchestra performed a series of symphony concerts in 1975 under the direction of a woman - the conductor Hortense von Gelmini . With her they took u. a. a record of Anton Bruckner's “ Zero Symphony ” .