The Northern Province ( Tamil : வட மாகாணம் Vaṭa Mākāṇam [ ˈʋaɖə ˈmaːɡaːɳʌm ], Sinhala : උතුරු පළාත Uturu Paḷāta [ ˈut̪uru paˈlaːt̪ə ], English : Northern Province ) is one of the nine provinces of Sri Lanka . It includes the districts of Jaffna , Kilinochchi , Mullaitivu , Mannar and Vavuniya in the northern part of the island. The capital is Jaffna . The northern province has an area of ​​8,884 square kilometers and almost 1.1 million inhabitants, 94 percent of them Tamils . The Northern Province was one of the areas affected by the civil war in Sri Lanka from 1983 to 2009 .

The northern province has an area of ​​8,884 square kilometers. According to its name, it covers the northern part of Sri Lanka. The Northern Province borders in the south on the Northwest Province , the North Central Province and the Eastern Province . In all other directions it is bordered by the sea: In the southwest lies the Gulf of Mannar , in the northwest between Sri Lanka and India preferred Palk Strait and the east of the Bay of Bengal .

Landscape on the Jaffna Peninsula

The Northern Province is divided into the following five districts :

The Northern Province has existed since 1833. Between 1987 and 2006, it was united with the Eastern Province as one province ( Northeast Province ). In 2006 the merger of the two provinces was declared invalid by the judiciary of Sri Lanka. 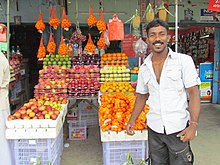 Death and displacement during the civil war decimated the population of the Northern Province. Between 1981, the year of the last census before the civil war broke out, and 2012, the province's population fell by 3.6 percent. The total population of Sri Lanka increased by 36.6 percent over the same period. Numerous residents of the northern province fled abroad during the war. There is also a considerable number of internally displaced persons: According to government statistics, there were almost 50,000 refugees in the Northern Province in 2012 and over 320,000 people who were previously displaced. 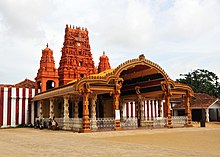 The Nallur Kandaswamy Temple in Jaffna: a visible sign of Tamil-Hindu culture.

Together with the Eastern Province , the Northern Province forms the Tamil settlement area of ​​Sri Lanka. The vast majority of the residents of the Northern Province are Tamils: According to the 2012 census, they make up 93.9 percent of the province's population (93.3 percent of which are Sri Lankan Tamils and 0.6 percent Indian Tamils ). There are also smaller minorities of Moors (Tamil-speaking Muslims) and Sinhalese (3.1 percent each). The numerically small but long-established Muslim minority, which in 1981 still made up 4.6 percent of the province's population, was systematically expelled from the LTTE-controlled areas of the northern province during the civil war in October 1990. Since the end of the conflict, some Muslims have returned. Most of the Muslims live in the Mannar and Vavuniya districts . The Sinhalese, on the other hand, are concentrated in the south of the Vavuniya district and the Welioya area in the Mullaitivu district. In Welioya, the government had planned to settle Sinhala new settlers in the 1980s, which developed into a serious point of contention in the Tamil-Sinhalese conflict. The Sinhalese, who were resident in Jaffna and the other Tamil majority areas of the Northern Province, almost without exception fled to the safe south of Sri Lanka during the civil war.

74.6 percent of the population of the Northern Province are Hindus . There is also a larger Christian minority of 19.3 percent (of which 15.4 percent are Catholics and 3.9 percent others) and smaller minorities of Muslims (3.2 percent) and Buddhists (2.9 percent). The Christian population is particularly well represented in the coastal areas. In the Mannar district, Christians even make up the majority of the population. While the majority of the Tamils ​​are Hindus and a smaller number of Christians, the Moors are all Islamic and the Sinhalese are mostly Buddhism.

In the elections to the Provincial Council of the Northern Province, the Tamil National Alliance (TNA) won a landslide victory. The alliance of moderate Tamil parties and former rebel groups, which calls for more autonomy rights for the Tamil minority, won 30 of 38 seats in parliament with almost 80 percent of the vote. The United People's Freedom Alliance (UPFA), a party alliance led by the nationwide ruling Sri Lanka Freedom Party , won seven seats. The Sri Lanka Muslim Congress (SLMC), the political representation of the Muslim minority, has one member of parliament . As a result of the election, TNA politician CV Wigneswaran was sworn in as Chief Minister of the Northern Province on October 7, 2013.