Otto H. Schindewolf, photo from the festival tape for his 70th birthday on June 7, 1966 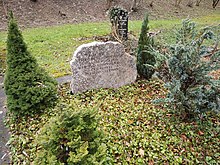 Grave in the Bergfriedhof (Tübingen)

Schindewolf was born in Hanover in 1896. From 1914 he studied at the University of Göttingen with Hans Stille and Rudolf Wedekind, among others, and after an interruption due to military service in the First World War at the University of Marburg , where he followed Wedekind, where he received his doctorate in 1919 on ammonites from the Oberdevon from the area around Hof . In 1921 he completed his habilitation as Wedekind's assistant and in 1927 he became an adjunct professor in Marburg. In the same year he went to the Prussian State Geological Institute in Berlin , where he was head of palaeozoology and looked after the collection and library. In 1933 he was in the USA. In 1947 he became a full professor for paleontology at the Humboldt University in Berlin . From 1948 until his retirement in 1964 he was a professor at the University of Tübingen and director of the palaeontological institute there. 1956/1957 he was rector of the university.

Schindewolf was born with Hedwig Schindewolf. Scheel (* March 25, 1900; † September 12, 2001) married and had the sons Eberhart Schindewolf and Ulrich Schindewolf with her .

As a paleontologist, he dealt mainly with ammonites and corals, but was also very interested in the conclusions for the theory of evolution that emerged from paleontology. In his theory of typostrophes he developed idealized ideas about the natural flourishing and extinction of species in the history of the earth . In contrast to the vast majority of evolutionary researchers ( modern synthesis ), who assumed the progress of evolution through small gradual changes, Schindewolf spoke out in favor of the existence of sudden changes through large mutations in the sense of Richard Goldschmidt ( hopeful monsters ). According to a catchy formulation by Schindewolf, the first bird emerged from a reptile egg. Even after Schindewolf, these sudden changes were the real reason why paleontologists were often unable to find transitional forms. In his main work, Basic Questions in Paleontology , Schindewolf presents his typostrophic theory comprehensively. This textbook has long been the standard work on evolutionary theory for German paleontologists. 1993 an English translation appeared in the main work because views Schindewolf factory Stephen Jay Gould (in punctualism ( punctuated equilibrium ) or punctuated equilibrium ) z. T. be taken up again. Schindewolf himself later suspected extraterrestrial causes for the increase in mutations (increase in cosmic rays). In 1954 he conducted field studies in the salt mountains in Pakistan , where he explored the Permian-Triassic border , where a great upheaval in the fauna took place (mass extinction), and where he was looking for evidence for the alternative theory of evolution he had developed.

In 1948 he received the Leopold von Buch badge . In 1962 he became an honorary member of the Paleontological Society . He had been a member of the Leopoldina since 1952 and a corresponding member of the Heidelberg Academy of Sciences since 1958 . Scientists from the German expedition GANOVEX III (1982–1983) named the Schindewolf Glacier in Antarctica after him.

Schindewolf is mentioned in Peter Høeg's bestseller "Fräulein Smilla's Feeling for Snow". It is said there that he coined the term "neocatastrophism" in the 1960s.