Otto Hirsch (born January 9, 1885 in Stuttgart ; † June 19, 1941 in the Mauthausen concentration camp ) was a German lawyer and administrative officer.

Memorial plaque in front of the Hedelfingen cemetery 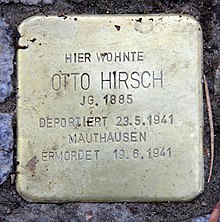 Otto Hirsch was born as the son of the Jewish wine wholesaler Louis Hirsch and his wife Helene, née Reis. He attended school in Stuttgart and studied law in Heidelberg , Leipzig , Berlin and Tübingen from 1902 to 1907 . In 1903 he interrupted his studies to do his military service and was promoted to Vice Sergeant in 1905 after a reserve exercise. As a Jew, he was unable to rise to the rank of reserve officer.

From 1907 to 1911 he completed his legal clerkship in Stuttgart and passed his second state examination in 1911. In 1912 he joined the Stuttgart city administration as a councilor.

Since he was legal counsel in Stuttgart and headed the war services system, for which he also wrote a legal commentary, he was declared indispensable in World War I and not drafted into military service.

After the November Revolution he was appointed as a reporter in the Württemberg Ministry of the Interior . From here he was sent to Weimar to work on Articles 97 to 100 on the waterways of the Weimar Constitution. In 1921, Hirsch became Württemberg's youngest ministerial advisor .

When he was appointed the first board member of Neckar AG, which was responsible for the construction of the Neckar Canal , in the same year , he was given leave of absence from the civil service for these tasks. In 1926, after the financing of the project had been secured, he applied to be released from the Württemberg civil service.

Together with the factory owner Leopold Marx and the musicologist Karl Adler , he founded the Stuttgart Jewish Lehrhaus , in which assimilated and Orthodox Jews were to learn together based on the model of the Frankfurt Lehrhaus . Great emphasis was placed on teaching the Hebrew language; the house also served as a place of exchange between Jews and Christians. In 1930 Hirsch was elected President of the Upper Council of the Israelite Religious Community of Württemberg .

After the National Socialists came to power in 1933, Hirsch had to give up his post at Neckar AG. As President of the Upper Council, he protested the effects of the seizure of power and organized Jewish self-help. In this function, Hirsch was one of the most important supporters of the Jewish Landschulheims Herrlingen founded by Hugo Rosenthal in October 1933 .

In 1935, Hirsch, who was one of the main representatives of German Jews at the time, was arrested for the first time by the Gestapo , but was soon released again. At the end of 1935 his family followed him to Berlin.

In July 1938, Hirsch represented the German Jews at the international refugee conference convened by Franklin D. Roosevelt in Évian , France. He continued his protests in Berlin. Shortly after the Reichspogromnacht he was arrested after renewed protests against the arson and interned in the Sachsenhausen concentration camp for two weeks . After his release, his work mainly focused on helping Jews to emigrate.

In July 1939, the Reich Representation of German Jews was forcibly transferred to the Reich Association of Jews in Germany . The security police appointed Hirsch, Baeck and others to the board. Working conditions became increasingly difficult with the beginning of the war. Nevertheless, numerous emigration opportunities were opened up until the emigration ban in October 1941.

On February 16, 1941, Otto Hirsch was arrested without giving any reason. He was interned in Mauthausen concentration camp on May 23 , where he died on June 19, 1941, according to official information. The exact circumstances of his death are unknown.

At the opening of the Stuttgart harbor on March 31, 1958, the city of Stuttgart named the three bridges connecting Hedelfingen and Obertürkheim the Otto Hirsch Bridges.

In September 2016 , two stumbling blocks were laid for him and his wife in front of his former place of residence, Berlin-Grunewald , Koenigsallee 35 .

From 1985 to 2012, the city of Stuttgart together with the Society for Christian-Jewish Cooperation Stuttgart eV and the Israelite Religious Community awarded the Otto Hirsch Medal annually to personalities who have made outstanding contributions to Christian-Jewish cooperation. The award was supported by Hans Georg Hirsch (born August 8, 1916 in Stuttgart; † December 15, 2015 in Bethesda), Otto Hirsch's son , who lives in Maryland , USA. The city maintains a list of the award winners.

The Otto Hirsch award has been presented in Stuttgart for the first time since 2013, based on an amendment to the statutes . Not only should individual personalities be honored, but also groups and initiatives from all religious communities that have made a special contribution to the Christian-Jewish dialogue.