This article is about the former general secretary of the Italian Communist Party, for the Russian city named after him see Tolyatti . 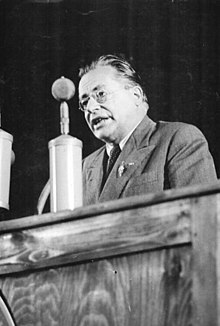 Palmiro Togliatti as a guest speaker on the III. SED party congress, Berlin 1950

Togliatti completed a law degree in Turin . He began his political life in the Socialist Party of Italy ( Partito Socialista Italiano ) before the First World War . After the war, in which he took part as an officer, he became party secretary in Turin in 1920 and belonged to the group around L'Ordine Nuovo in Turin.

He was a founding member of the PCI in 1921. Togliatti had been a member of the Central Committee since 1922 , published anti-fascist propaganda under the pseudonym Ercole Ercoli until 1926 , was imprisoned by the fascist regime of Benito Mussolini in 1923 and 1925 , emigrated to Germany in 1926 and later to the USSR . There he took on a leading role in the Comintern , was a supporter of Stalin's Popular Front policy at the VII Congress in 1935 and took part in the Spanish Civil War between 1937 and 1939 as a member of the Garibaldi battalion . After General Secretary Gramsci was arrested, he rose to be the leading figure of the PCI until his death, of which he became General Secretary from 1947.

He spent the 1930s in exile , from which he returned to Italy in March 1944. Under his leadership, the PCI, which he re-founded, turned Salerno . The PCI should transform itself as a "new type of party" from the cadre to the mass party. Togliatti sought a popular front with the socialists in order to revolutionize the state and society through parliamentary channels.

At the VII. And last World Congress of the Comintern in August 1935, the Italian communist leader, who had adopted the code name "Ercoli", declared:

“If it is necessary to get in touch with people, to speak a new language, to devalue earlier formulas, to destroy old plans, to change working methods, to rearrange the organizational forms - well what, we will do that without the slightest hesitation. "

This change of policy was the turning away from the policy of the dictatorship of the proletariat towards democratic reforms, on the other hand enabled the PCI to be recognized by the other anti-fascist parties as part of the democratic spectrum that decided whether to maintain the monarchy or the establishment of a republic. However, it went hand in hand with the disarmament of the Communist-dominated Resistancea . As a result, the party opened far to the right in relation to the positions previously represented; so it renounced major nationalizations in industry and recognized a strong role for the church.

This also earned her entry into the bourgeois government, of which Togliatti was Deputy Prime Minister from 1944 to 1945. He was a member of Ferruccio Parri's cabinet , together with the Christian Democrat Alcide de Gasperi, as Minister of Justice from 1945 to 1946 . The far-reaching amnesty immediately after the end of the war, with which crimes during the fascist dictatorship were made an impunity, is associated with his name . On July 14, 1948, an assassination attempt was carried out on Togliatti, which he survived and which resulted in a series of strikes. From 1948 he was a member of the Camera dei deputati for a total of four legislative terms .

In 1956, Togliatti played a decisive role in the development of the theory of polycentrism , that is, the "unity in diversity" of different political practice. After the suppression of the uprising in Hungary ( Hungarian People's Uprising ) by the Soviet Union, he proclaimed his own “national path to socialism”.

Under his leadership, the party grew to become the second strongest in Italy and the largest non-ruling communist party in Europe. Although it was permanently excluded from the national government after 1946, it was the mayor of many cities and was not without influence.

The Russian city of Stavropol on the Volga , in which the AwtoWAS (Lada) automobile factory was built in cooperation with Fiat , which Togliatti helped to establish, was renamed Tolyatti (transcription of the Cyrillic spelling) in his honor after his death in 1964 .

He was succeeded as General Secretary of the PCI in 1964 by Luigi Longo , who also initiated the publication of the political “Testament Togliatti” in the daily newspaper L'Unità and the magazine Rinascita .