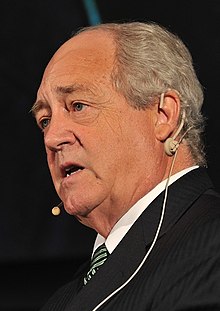 Patrick Moore (* 1947 in Port Alice , British Columbia , Canada ) is a Canadian former environmental activist and now a PR consultant. He was involved in the creation of Greenpeace and was President of Greenpeace Canada until 1986. Moore is now a critic of the environmental organization and sees himself as a founding member. In 1991 he founded the PR company Greenspirit , which he chairs. Moore also worked for the timber company Asia Pulp and Paper, among others .

Youth and time as a Greenpeace activist

Moore grew up in Winter Harbor on Vancouver Island . He began studying biology , forest science and genetics at the University of British Columbia . From 1969 to 1972 he received a grant from the Ford Foundation . In the late 1960s he became a radical environmental activist and founded the environmental protection organization Greenpeace with like-minded people in 1971 to protest against hydrogen bomb tests in Amchitka , Alaska. He was a participant in this ship expedition to Amchitka - the first Greenpeace campaign. After this first voyage, the most important crew members decided to formally change the name “Don't Make a Wave Committee” to “Greenpeace Foundation”. Those decision makers included founders Robert Hunter , Rod Marining and Ben Metcalfe, as well as Patrick Moore.

In his collaboration with politics to implement his ideas about environmental protection, he came increasingly into conflict with Greenpeace and other environmental protection organizations. In 1986 he left the organization. As a justification, he later stated that extremists had taken over the organization in the 1980s. According to Greenpeace's Tamara Stark, leaving was not necessarily his own decision. While the environmental activists accused him of treason, Moore criticized the ideological ideas of the Greenpeace members, who were unwilling to compromise because of their protest stance. After his departure in 1986, the organization had degenerated into a group of scientifically illiterate people.

Since then, Moore has continued to see himself as an environmentalist and reiterated the criticism in later writings, e.g. B. in his book Confessions of a Greenpeace Dropout: The Making of a Sensible Environmentalist . He sees the environmental movement turning to political and social activism. In addition, criticism of capitalism and globalization would become increasingly important and scientific or ecological considerations would be neglected. This leads, for example, to the rejection of forestry , green genetic engineering or aquaculture despite recognizable advantages for environmental protection or the fight against hunger and is hostile to progress. Poverty is also idealized and presented as a noble lifestyle.

After the Greenpeace period he founded the aquaculture company Quatsino Seafarms, which he gave up in 1991 after falling salmon prices. In 1991 Moore founded Greenspirit , an environmental PR company, which he chairs. Since 2006, he has served with Christine Todd Whitman as chairman of the Clean and Safe Energy Coalition of Energy Companies, an organization that promotes nuclear energy . In 2010 he was hired as a representative of the Indonesian timber company Asia Pulp & Paper. He is also director of NextEnergy Solutions, a company that sells geothermal systems .

In addition to the Greenspirit publications, Moore has written articles and given interviews for several media. He advocates expansion of forestry and the increased use of wood as a building material. He also recommends the increased use of geothermal energy . Moore recommended Germany to let the nuclear power plants run longer and to build more. This is the only way to achieve the CO 2 target.

He sees no advantage for humans or the environment in rejecting genetic engineering and recommends the use of golden rice to prevent the death of children from vitamin A deficiency. Against the background of the findings of the WHO about the probable cancer risk from glyphosate in Monsanto's product Roundup , Moore approached the media with the statement that glyphosate was completely harmless and that it could be safely drunk. When the interviewer offered him a glass of glyphosate, Moore said he wasn't an idiot and broke off the interview.

Furthermore denies Moore a human influence on climate change , because there is no scientific indication. "CO 2 emissions save the planet and mankind", he said in a lecture at the Global Warming Policy Foundation in London in 2015. Greenpeace Switzerland comments on Moore that he is "a paid ambassador for nuclear, paper and genetic engineering Industry "is. He would abuse his long-standing Greenpeace membership for legitimation in the media. He is also accused of providing false information about nuclear power technology. Moore also did not co-found Greenpeace, which is often wrongly stated in the media.