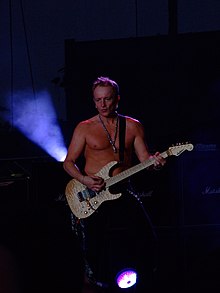 Philip Kenneth Collen (born December 8, 1957 in the London borough of Hackney ) is a British musician and guitarist of the British hard rock group Def Leppard , founder, guitarist and singer of the band Man Raze and co-founder of the blues rock band Delta Deep .

Collen played in various hard rock bands such as Lucy , Tush , Dumb Blondes and, most recently, Girl . Girl had some success in Great Britain with the albums Sheer Greed (1980) and Wasted Youth (1982) and reached number 50 on the British charts with their single Hollywood Tease .

1983 Collen replaced the guitarist Pete Willis at Def Leppard and got together with the guitarist Steve Clark the nickname "Terror Twins", which was due to both virtuosity. With Def Leppard, Collen recorded the album Pyromania , which brought the band the breakthrough. The group achieved international success in 1987 with the follow-up album Hysteria . While recording the album Adrenalize , Steve Clark succumbed to alcohol addiction in January 1991 when he choked on his vomit after an overdose of alcohol , antidepressants and pain relievers . Clark's successor was Vivian Campbell , who has since formed the band's guitar duo together with Collen.

In addition to his work as guitarist with Def Leppard since 2004, Collen has also been guitarist and singer of the band Man Raze , which also includes drummer Paul Cook ( Sex Pistols ) and bassist Simon Laffy, who had already played with Collen for Girl . The group released their debut album Surreal in 2007 , which they recorded in Joe's Garage, the studio of Def Leppard singer Joe Elliott. On May 31, 2011 Man Raze released the single Over My Dead Body , which was followed on August 2, 2011 by the second studio album punk funk roots rock .

Collen lives in Orange County, California . He is married and has two sons and three daughters.

With the instrument manufacturer Jackson Guitars , Collen has designed its own line of guitars. The guitar with the name "PC1" has a body made of mahogany and a top made of flamed maple. The neck is also made of flamed maple. The pickups are made by DiMarzio . The guitars are equipped with Floyd Rose tremolo systems. A special feature of the guitar is a sustainer system with which tones can be extended extremely.