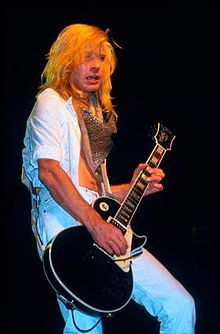 Steve Clark at an appearance

Steve Clark was born in Hillsborough , the northwestern part of Sheffield , England. On the condition that he would learn the instrument, his father granted his wish for a guitar at the age of eleven. Before joining Def Leppard, Clark played cover songs with his band Electric Chicken . He met Pete Willis, who was one of the founding cast of Def Leppard. Clark was after the audition the song in January 1978 member of the band Freebird by Lynyrd Skynyrd had played without accompaniment.

Clark showed himself to be a gifted songwriter and made a significant contribution to the band's albums. He shared the lead guitarist role with Pete Willis and was nicknamed "Steamin '" and "The Riffmaster". When Pete Willis had to leave the band while recording the album Pyromania , Phil Collen was hired as a replacement. The duo Collen / Clark was involved in the greatest commercial successes of the group, namely the albums Pyromania , Hysteria and Adrenalize , whereby Clark was only able to contribute to the latter as a songwriter, but no longer as a guitarist. His last appearance with Def Leppard was at the 1989 MTV Video Music Awards on September 6th. There the band Tear It Down played .

Clark, who had long been struggling with an addiction, was found dead by his girlfriend on January 8, 1991 on the couch in his London apartment. The autopsy revealed that he had died of a codeine overdose; also were Valium , morphine and alcohol found in his blood. Daniel Van Alphen, with whom he was out the night before, said they went to a pub and then drove to Clark's house to watch a video. Clark was buried in Wisewood Cemetery in Loxley near his parents' home.

Def Leppard continued working on Adrenalize without Clark, the guitar parts were all recorded by Phil Collen. A new guitarist, Vivian Campbell , was first committed to the album tour. The group dedicated Adrenalize to their late guitarist:

“This record is dedicated to Stephen Maynard Clark, guitarist and good friend. We all have different memories of him: They range from his threat at the end of 1978 to leave the band if we don't finally stop rehearsing and give a real concert, to completely impressive "shadows" on the stage with his hanging in front of his knees Les Paul up to his performances away from the stage in bars and hotel rooms. It's strange to think that you really know someone when you're beginning to realize that there's more going on than what you could see. For the past few years, Steve's life has been a battle. It stopped being about writing or recording music and became a struggle for survival. Seeing someone dissolve right in front of your eyes is a tough thing, and while frustrating, it's impossible to stop. We've learned something about human nature, and believe us, it's not necessarily beautiful. Still: enough. Steamin 'took part in the writing of most of the songs on this album, and it's the music he'll be remembered for. We miss him. "

The American band Tesla , who opened up for Def Leppard on the Hysteria US tour , recorded a song called Song & Emotion (To Our Friend, Steve 'Steamin' Clark) to pay tribute to his life and pay tribute to him. The title is included on the album Psychotic Supper . Clark's death was also part of the inspiration for the song One Sweet Day , which Mariah Carey and Boyz II Men recorded.