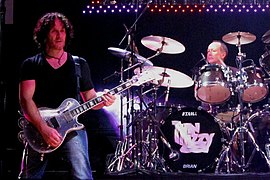 Vivian Patrick Campbell (born August 25, 1962 in Lisburn , County Antrim , Northern Ireland ) is a Northern Irish rock musician . He is a musician in the hard rock band Def Leppard and was guitarist in the band Thin Lizzy from May 2010 to 2011 . Before joining Def Leppard in 1992, he had played with Whitesnake , Riverdogs and Shadow King , among others . He first became known as the guitarist of the band Dio , of which he has been a member since 1982. He is co-author of the song Stars , which was written in 1985 to raise funds for the victims of the famine in Ethiopia 1984–1985 .

Campbell was born in Lisburn in County Antrim , Northern Ireland, in 1962 and attended Rathmore Grammar School . He started playing guitar at the age of 12. He was guitarist for the band Sweet Savage before joining the formation Dio founded by Ronnie James Dio , with which he became internationally known.

Sweet Savage was a NWOBHM band that Campbell joined when he was 15 years old. In addition to Campbell, the group included drummer David Bates and bassist and singer Ray Haller. The group also influenced Metallica , who recorded a cover version of the song "Killing Time" for their Garage Inc. album. Sweet Savage released an EP in 1981 that included four BBC radio sessions and their first single , "Take No Prisoners". B-side of the single was "Killing Time". Campbell left the band in the spring of 1983 to replace Jake E. Lee with Dio. Lee had accepted the offer to play for the late Randy Rhoads in Ozzy Osbourne's band .

Much later, in the 1990s, there was renewed interest in Sweet Savage and the band released an album without Campbell's involvement. 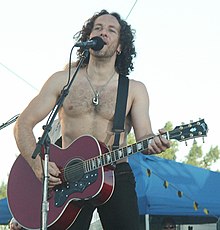 By the time Campbell joined Dio, Ronnie James Dio, Vinny Appice and former Rainbow bassist Jimmy Bain had already completed most of the songs on their debut album Holy Diver . After the worldwide search for a suitable guitarist had been concluded with the engagement of Campbell, the first line-up of the young band was now fixed. The album was successful, and the band played at the Monsters of Rock Festival in 1983 , among others .

The band went back to the studio soon after to record the second album, which was called The Last in Line and climbed to number 23 on the US album charts . The third album, Sacred Heart , was also successful and reached number 29 on the US charts. It contained the title "Hungry for Heaven", which was also released on the soundtrack for the film Vision Quest . The band had also recorded “Hide in the Rainbow” for the soundtrack to the film The Steel Eagle . This song was the last that Campbell took part in. For the live EP Intermission , the rhythm guitars that had already been recorded were re-recorded by Craig Goldy , and Campbell's parts were copied . Goldy was also responsible for the guitar parts on the album's only studio track, "Time to Burn". Campbell left the band in 1986 and switched to Whitesnake . Craig Goldy was introduced as a new member of the band shortly afterwards.

In 2013 Campbell founded the band Last In Line with all the musicians who had played on the Dio album The Last in Line. The late Ronnie James Dio will be represented by Andrew Freeman, who has been to The Offspring , Lynch Mob and Hurricane. Bassist Jimmy Bain passed away in January 2016.

In 1987 Campbell became a member of the British hard rock band Whitesnake. Ex- Thin Lizzy and Tygers of Pan Tang guitarist John Sykes wrote and played the lead and rhythm parts of the album simply called Whitesnake (USA) and 1987 (Europe), but was fired from David Coverdale after the recordings were completed. Campbell was hired as a replacement and played alongside Adrian Vandenberg , ( Teaser , Vandenberg ), Tommy Aldridge ( Ozzy Osbourne ) and bassist Rudy Sarzo ( Black Oak Arkansas , Quiet Riot ). Campbell left the band after the 1987/1988 world tour.

In 1990 Campbell founded the band Shadow King with Lou Gramm . The group released an album and only played a single concert before Campbell received the offer to join Def Leppard. Shadow King then broke up.

Campbell joined the group Def Leppard in 1992 after their album Adrenalize was released. He replaced Steve Clark, who died on January 8, 1991 . Campbell made his first appearance with the group in a club in Dublin in front of about 600 spectators, only a week later, on April 20, 1992, the band performed at the Freddie Mercury Concert for Life . Campbell has been a permanent member of the group ever since and recorded the albums Slang , Euphoria , X , Yeah! With Def Leppard . and Songs from the Sparkle Lounge . In 2011 the live album Mirror Ball was released . Since 2014 Campbell has often been represented by Steve Brown (Trixter) due to his cancer.

In addition to his work with Def Leppard, Campbell also played with the bands Clock and Riverdogs . In 2005 he released a solo album entitled Two Sides Of If , on which he recorded numerous cover versions of his favorite blues songs, and the album also contains a self-written blues title. The guests on the album include guitarist Billy Gibbons ( ZZ Top ; "Like It This Way" & "Willin 'For Satisfaction") and singer Joan Osborne ("Spoonful"). The drummer Terry Bozzio was also involved in the recording.

In September 2010, Campbell agreed to go on tour with his personal favorite band Thin Lizzy . He did not become a permanent member of the group, but was touring with the band until early 2011. On May 11, 2011, Campbell posted a free song he sang on his website entitled "Seems So Real"; other musicians on this recording were Robert Cosio (rhythm guitar, slide guitar and electric piano), Lou Castro (bass) and Mark Shulman (drums). On the new album of Steel Panther , All You Can Eat , published on March 28, 2014. Campbell could be heard on the song "Gang Bang At the Old Folks Home" as a guitarist.