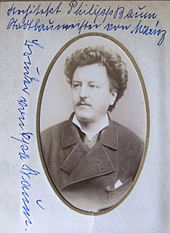 Portrait of Philipp Baum - around 1880 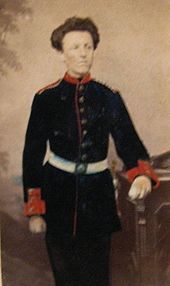 Baum as a Prussian officer candidate around 1880

Coat of arms of the Baum family

Philipp Baum attended the Protestant elementary school in Schwabenheim. For the winter semester of 1871/1872 and the second semester of 1872 at the construction school of the Polytechnic School in Darmstadt , Baum registered and paid an entrance fee of 25 guilders each. According to the address directory of the university in Darmstadt, which was drawn up in 1885, Baum only studied there for these two semesters. He is listed in this directory as an architect and lives in Mainz . He then continued his studies in Vienna and Stuttgart. Then he made extensive study trips in Europe. It is not known which exams he passed.

After completing his studies and his study trips, Baum probably went to Prague to work on the Stern Castle project on the White Mountain . In 1874, Falke and Baum are said to have made the plans for the mosaic and ceramic floor and in 1877 Baum published the book Schloss Stern with 40 high quality panels. He then set up a studio for architecture and applied arts in Mainz. According to the address book of the city of Mainz, he had had a studio in the Upper Town of Mainz , Linsenberg 3, since 1881 .

In addition to his architectural work, the focus was now on the arts and crafts. This is how Baum's collaboration with Villeroy & Boch in Mettlach came about . Salzgeber writes about this:

"The most important thing in this direction, however, was the floor, composed in the sense of a rich barocco, for the huge collegiate church in Einsiedeln in Switzerland, which in terms of size and character has no equal in the entire modern art industry."

Repeated exhibitions of his drawings brought him recognition in professional circles. But his architectural work was not neglected either. As part of the city ​​expansion of Mainz beyond the Große Bleiche and the Kaiserstraße , he designed several city palaces. With the exception of one, all of them perished in the air raid on Mainz by the Allied bomber units.

Baum died relatively young at the age of 37 in the house of his brother Friedrich Baum in Schwabenheim.

After completing his studies, Baum worked on the renovation of the Stern pleasure palace near Prague. Baum must have worked there for a long time, because in 1877 he published the book Schloss Stern bei Prag for the EA Seemann publishing house in Leipzig .

From the order books of Villeroy & Boch

The design was commissioned by the entrepreneur Dr. Paul Schifferdecker (in the Portland-Cement -Werk Heidelberg Schifferdecker & Söhne oHG , today HeidelbergCement ). The house is located in the Neuenheim district , Neuenheimer Landstrasse 101-103.

Rosette with the four elements for a building in Dresden

The order was placed by Villeroy & Boch and carried out in 1886. The factory was probably intended for a company-owned building in Dresden. The company Villeroy & Boch founded a branch in Dresden in 1856. Due to the expansion of the company, the factory facilities were constantly expanded.

The company Villeroy & Boch placed the order to design an arched frieze with fish for a water basin.

In this church a mosaic with St. George and the papal coat of arms was laid.

Arched fields for the Villa Rebentisch

The villa was built in 1883 by the architect and builder Carl August Rebentisch (1846–1890) and lived in until his death. It was located at Spohrstraße 13a and was destroyed in the Second World War.

Coat of arms for the Minister of War

The client was the Prussian War Minister Paul Bronsart von Schellendorff , nothing is known about the whereabouts of the work.

This pen mosaic was commissioned by Edmund Bloch (Mettlach) in 1883 for the Villa Gattel.

In the order book of the company Villeroy & Boch, the order is referred to as detailed drawings of the papal, cardinal and bishop's coats of arms, a large rose window with 12 heavenly symbols, 4 planets, day and night, covering the chapel of grace . In 1884 Baum received the order from the governor of the monastery, Father Raphael Kuhn, to redesign the floor with pen mosaic and ceramic plates from the Villeroy & Boch company for the monastery church in Maria Einsiedeln, Switzerland, together with the Dompräbdaten Schneider. He also designed the pilaster ornament in the vestibule and porch.

"Qui si sana" means "Here you get well". The term is often used in health resorts for hotels and bathing facilities. From 1883 to 1885 a new bathhouse (bathhouse IV, now called bathhouse II) was built in Bad Oeynhausen by the architect Zygmunt Gorgolewski.

According to the information from the Catholic parish office of St. Paulin in Trier on July 3, 2001 nothing is left of the frieze and the 1,800 m² paving.

The same St. George was moved here as in the Liebfrauenkirche in Rhede. The work was carried out after Baum's death. The following pictures show the floor covering still preserved today:

In 1887 Baum was commissioned by a Seidel to design a small eagle with corner decorations for pin mosaic.

Mausoleum on the Rosenhöhe , Darmstadt

In the 1880s he was commissioned by the Grand Duke of Hesse and the Rhine to design the floor and other decorations in the mausoleum on Rosenhöhe near Darmstadt. The mosaic floor is completely destroyed by frost.

In the handwritten documents in the company archive of the Villeroy & Boch company, Baum is mentioned with another work. It is the decoration of an entrepreneur's building in Mannheim.

Building as part of the Mainz city expansion

Several city palaces that were built as part of the city expansion of Mainz bore his signature. The achievements he made can be seen in the only surviving house at Kaiserstraße 35. It was built in 1883/1884 in the neo-renaissance style with the great variety of forms of historicism . The blueprint is dated July 2, 1883. Georg Panizza was named as the client. The building is now a listed building. The State Monuments Office describes the house as follows:

“On the ground floor gate drive with the original two-leaf door leaf and rich wrought-iron grille preserved. The main floor by large Ädikulafenster and Blendbalusterbrüstungen highlighted the central box bay window richly decorated with columns order and fitting work. The final floor is characterized by small, coupled arched windows and a richly decorated frieze zone as a mezzanine . The central axis is raised by a gable with obelisk attachments. In the doorway, pilaster structure and floor, the stairwell with colored glazing, filigree banisters and associated doors have been preserved. The house is architecturally sophisticated and executed with high quality craftsmanship and was presented in the Architectural Review in 1889. "

In the Berlin Architecture Museum there is a folder with 35 plans by Philipp Baum.

At the age of 14 he was already making pencil drawings. The oldest depicts a wounded soldier of Napoleon in the Russian campaign in 1812.

Soldier in Russia under Napoleon

Other pencil drawings are known:

Motifs from his study trip to Italy

There are 2 watercolors and an oil painting from 1869.

The journal Kunstchronik published a necrology apparently taken from the Darmstädter Zeitung :

“In addition to his practical goals, he was already active early on in the field of art history and proved and a. his ability in this area through an excellent publication of the Stern Castle near Prague, famous for its layout and picturesque furnishings.
Since his establishment in Mainz, he has primarily been engaged in arts and crafts, for which his connections to the large-scale industry of Villeroy and Boch in Mettlach offered him constant opportunities. A number of delicately perceived and tasteful achievements emerged from this; in particular, he worked on designs for mosaic floors using ancient Roman models with decided luck. The most important thing in this direction, however, was the floor, composed in the sense of a rich barocco, for the huge collegiate church in Einsiedeln in Switzerland, a work that has no equal in size and character in the whole of the modern art industry. Study trips to Italy, as well as to Belgium, Holland and England promoted Baum's artistic development as well as they gave him the opportunity to amass a wealth of the most splendid studies from all areas. Baum was a master in a fine, tasteful, indeed delightful rendering of architectural monuments, but especially of picturesque, decorative and crafted details. What he created in this direction can be regarded as excellent study material for art institutes. Repeated exhibitions of his traveling fruits brought him the recognition he deserved and at the same time paved the way for him to diverse activities. Decorative tasks were also important to him in Darmstadt, including a. transferred in the mausoleum on Rosenhöhe. A widespread effectiveness resulted for him with the local city expansion. A number of new buildings are linked to his name: the pithy structure of the architecture is combined with neatly treated details and a painterly overall attitude. At last he returned to the elegant simplicity of a Florentine renaissance in the composed facade of the Falk-Ring house on the boulevard and - unfortunately - and with it, ended his creative activity at an early stage. Under severe sickness his strength slackened, since he had hardly crossed the threshold of manhood. In addition to his artistic talent, which was mainly expressed in pleasing representations, the harmless nature of his being earned him favor and affection in the broadest circles. What he created bears the stamp of a sensitive nature through and through: Each of his achievements will therefore also remain a monument to his type of senses and his striving. "