Poly-Play is the only video slot machine produced by VEB Polytechnik Karl-Marx-Stadt in the German Democratic Republic (GDR) . It was manufactured from 1986 to 1989 and mainly installed in holiday homes and public institutions. A total of a maximum of 2000 devices were manufactured, the production costs were around 22,000 marks per device.

The development of the Poly-Play was initiated by the Ministry for State Security of the GDR and took place in the state-owned company VEB Polytechnik Karl-Marx-Stadt together with the Robotron combine . The Poly-Play was presented for the first time in 1986 at the trade fair for tomorrow's masters in Leipzig .

The device was manufactured from 1986 to 1989 and a total of about 1000 to 2000 machines left the factory during this period, the annual production averaging about 300 copies. The case was brown and was made by the furniture manufacturer VEB Raumkunst Mosel ( Zwickau ). All other components were also manufactured in the GDR, so the circuit boards came from the Textima combine and were hand-assembled by VEB Polytechnik.

A vending machine cost 22,000 marks to manufacture and the VEB State Circus of the GDR was responsible for approval, installation and operation . It was sold preferentially to FDGB holiday homes and public institutions and was not intended for private households. A game on the machine cost 50 pfennigs. With 42 machines, the Sports and Recreation Center (SEZ) in Berlin was probably the largest amusement arcade in the GDR.

With the availability of more modern western gaming computers after the fall of the Berlin Wall and German reunification , the Poly-Play lost a lot of its market value and its production was discontinued. The former VEB Polytechnik was privatized in 1993 and went bankrupt a few years later.

The Poly-Play consisted of a housing in which a television set, a computer, a light effects system, an audio amplifier, a coin validation system for inserting coins and a few other components were installed.

The computer was a variant of the robotron K 1520 microcomputer system with a Zilog-Z80 replica ( U880 ), an 8-bit processor with a clock rate of 2.47 MHz, and its own sound system (mono). A 35 KB EPROM was installed as memory , which was distributed over 35 chips.

The computer supported a color palette with ten colors and ran with an image resolution of 512 × 256 pixels with a refresh rate of 50 Hertz on the color television called RFT Colormat 4506, which was built behind a glass pane . In addition, both the lighting system and the sound were from the computer controlled. Behind the marquee were eight colored lamps that formed a light organ and were controlled via the main board. The number of games played was also saved.

The software consisted of a central operating system that was uploaded from the fixed EPROMs when the device was switched on. The list of available games that were on its own EPROMs was loaded via the processor card. The selection menu was structured according to the available games and was then available for selection. When a game was selected, a help screen was loaded with the rules of the game and operating instructions, which also prompted you to insert coins. If the game did not start within 30 seconds, the help screen closed again and the selection menu was displayed again. If, on the other hand, a coin was inserted, the selected game started.

All games had a time limit and could not be canceled. When the time ran out, the game returned to the main screen. The games were linked to fixed addresses and could not be combined at will. They were programmed in machine language and were initially only available in German and later also in other languages.

Overall, the Poly-Play was built in four versions, with the conversion of the versions always being carried out step by step and accordingly versions were also available that contained components from both editions. The development version of the Poly-Play ESC 1 still had eight massive red, rather stiff buttons on the desk for starting the games, which were already replaced by a menu in the first series models. Version 2, on the other hand, was the actual production model and had a selection menu for the games. A third version, the Poly-Play ESC 2 had some adjustments and was last replaced in 1989 by the ESC 2.1 , which was only on the market for a very short time. A 5th design, the ESC 3 was under development, but was no longer implemented. 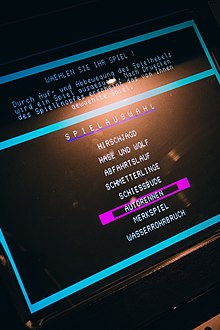 The oldest design, officially known as ESC1 ("Electronic Game Computer 1"), had eight red start buttons on the control panel that were used to select which game should be started. In addition, as with the successor models, there was the game lever and the fire button. From around the serial number 200, the second design appeared, also called ESC1 , in which the eight program start buttons were omitted and the game selection was made via a menu with the game lever.

A total of eight games were available as standard with the ESC1 :

Four more games were planned. The machine code contained references to games with the titles "The Gardener", "In the Greenhouse", "Hailing Clouds" and "The Diver". At least two of these games were also installed on some machines.

The license status of the games (ROMs) is unclear after the closure of the successor company Polytechnik Frankenberg GmbH in 2006. The games were never officially free software , but were labeled as such by sites like MAME even before they closed. Apparently it is abandonware .

Many players played the hare and wolf most often, followed by the shooting gallery. Precisely because the hare and wolf were apparently not speed-limited by the CPU in later levels, good players were able to show their skills and clear a level with a flying hare in a few seconds, which caused a lot of amazement.

The curiosity of Shooting Gallery, however, was that at some point only ducks appeared on the field. As a duck arrives in the lower row starts to fly and eat the ammunition straight from the magazine, this was also the natural end of the game.

At the time of poly-play, players were also familiar with their western counterparts, such as the imported machines from the amusement arcades at the Kulturpark in Berlin-Treptow, which was open all year round. But the poly-play never had a bad reputation. Like the Trabant, it was initially only created to provide entertainment for the masses.

The Poly-Play 2 was manufactured in very small numbers from about the serial number 1300 and in the version ESC 2.1 from 1989. Some devices of this type were in the sports and recreation center in Berlin-Friedrichshain, although some of the new games came without sound and can hardly be called final.

The quality of the new games could in no way keep up with their western counterparts or the Poly-Play 1. According to the information in the machine code of the Poly-Play 1, it can be assumed that these were already old game developments that did not make it into the Poly-Play 1.

The new games have therefore been removed from the Czech version of Poly-Play 2. This only kept the tab menu of the Poly-Play 2, although this is obviously more uncomfortable, since you only see the current selection and the games of the Poly-Play 1. The internal game instructions have also been completely translated into Czech.

After the release of the ESC 2.1. Another design was under development under the designation ESC 3 , but it was no longer implemented. With this type of construction, the software was no longer stored on EPROMs, but loaded into the gaming machine's main memory when it was switched on from a data carrier, probably a magnetic cassette. The type 4 processor card was already prepared for this. Due to the change, the game selection could have been greatly expanded and varied.

Manipulation of the machines 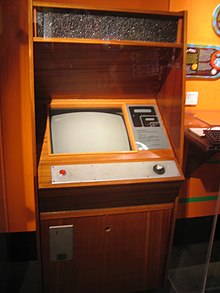 The coin slot in the machine, which was designed for 50 pfennigs , was insufficiently secured against manipulation with heavily inserted one-pfennig coins. The penny was first pressed against the upper edge of the coin slot with great force and then snapped into it. Both the coin diameter test and the subsequent coin thickness test often failed with this trick. However, since the machine was not intended to be used for making money, but for entertainment in FDGB holiday homes, youth hostels and clubs, this was often tolerated. In some clubs, the machine also ran with the coin slot deactivated, but the rush was very high.

You could deactivate the coin slot yourself with a bit of skill by opening the lock of the machine with a nail file or, as an authorized person, with the appropriate key and simply pressing the switch (a normal built-in light switch) down. Then you could play as long as you wanted without paying (normal free game mode).

Location of the devices

The whereabouts of many devices is unclear, two devices are with the RetroGames eV association, one is in the Berlin Computer Games Museum . A reconstructed model is in the arithmetic unit in Halle .

A machine was also on display at the Game On computer game exhibition at the Science Museum in London from October 21, 2006 to February 25, 2007.

The Poly-Play (version 2 with eight games and the selection menu) has been emulated by MAME since 2000 . The Poly-Play 2 (version 3) with ten games has only been available for the MAME 0182 since January 2017. The extracted Rome comes from a Czech device, the ZRE-PP. Some Poly-Play games also run on the GDR home computer KC85-4 .

The novel Polyplay by Marcus Hammerschmitt from 2002 is about the gaming machine. In the Simpsons episode Homer, get out the hammer! you can see a slot machine with the label Polybius , which is based on the Poly-Play machine. The font of the logo corresponds to that of the Poly-Play machine. This quickly developed into the legend of the same name about a slot machine, which was supposedly developed by the US government to influence players.