The portrait of Henri Rochefort (French: Portrait d'Henri Rochefort ) is a painting by the French painter Édouard Manet . The 81.5 × 66.5 cm portrait, painted in oil on canvas, shows the writer, journalist and politician Henri Rochefort . The painting is in the Hamburger Kunsthalle . 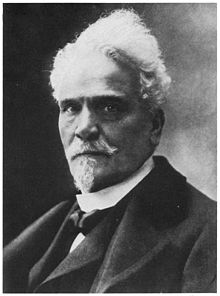 Henri Rochefort, photograph by Nadar, around 1897

In this painting Manet portrayed Victor Henri Marquis de Rochefort-Lucay, who as Henri Rochefort was a well-known pamphleteer in the Second Empire and who was a staunch opponent of Emperor Napoleon III. occurred. The portrait, executed as a chest piece , shows the man with his arms folded and turned to the left. Dressed in a black suit jacket, a white shirt with a stand-up collar and a bow around the neck, only the area above the wrist can be seen from the right arm and only the tips of the three middle fingers from the left hand. The area of ​​the upper body is largely painted in a realistic style in accordance with the rules of the Académie des Beaux-Arts , only the fingertips are rather sketchy.

In contrast, the face, whose line of sight fixes a point outside the left edge of the picture, shows a brushwork clearly influenced by Impressionism . On the facial skin, Manet used, among other things, gray and blue dots of color to characterize the pockmarked face. In addition to a thick mustache , a goatee, the few thin hairs of which Manet executed with fine brushstrokes, is one of the typical distinguishing features of the sitter. Another noticeable characteristic of the person portrayed is the hair on his head, executed in long brushstrokes in gray and brown tones. Rochefort still wore the hairstyle that “flies away” upwards and backwards, as a photograph by Nadar from around 1897 shows.

The image background is kept almost monochrome in a dark ocher gray tone. A light from the left slightly illuminates the background area next to the face, while a shadow effect is indicated on the right behind the head and the hair area. In the lower right corner of the picture there is the signature "Manet" and below that the year "1881".

The art historian Josef Kern describes the painting with the words: “The posture of the sitter, who looks past the viewer to the left and out of the picture, his arms energetically and somewhat defiantly crossed over his chest, is impressive. Manet achieved plasticity by placing the black-clad half-length figure in front of a dark background, a trick that portraitists used long before Manet. "

Letter from Manet to his friend Isabelle Lemonnier with the exclamation “Vive l'amnestie”, 1880

Manet and Rochefort were both part of the Napoleon III regime. negative, but probably only got to know each other personally ten years after the end of the Second Empire. Rochefort, who was deported to a penal colony in New Caledonia in 1873 because of his active participation in the Paris Commune , lived in exile after his sensational escape in 1874 and did not return to France until 1880. The prerequisite for the return was an amnesty for those involved in the commune initiated by Léon Gambetta's government on the national holiday. Manet was extremely pleased with this amnesty and decorated a letter to his friend Isabelle Lemmonier with two French flags and the exclamation “Vive l'amnistie” ( Long live the amnesty ).

Manet and Rochefort's first meeting may have taken place in Nina de Callias' drawing room , where they both frequented. After Rochefort's return, his spectacular escape in 1874 returned to the Paris public consciousness thanks to his novel L'évadé, roman canaque ( The Escape , A South Seas novel ), and Manet intended to capture this event in a painting. In order to find out the details of the escape directly from those involved, Manet asked the etcher Marcellin Desboutin , whom Manet had portrayed as early as 1875, to arrange a meeting with Rochefort. Desboutin, a relative of Rochefort, then wrote to Manet: “The proposal was received with enthusiasm. ... Not only Robinson-Rochefort but also Olivier Pain-Friday will be available to you whenever you wish ... All doors are wide open to your name and your talent ... “Olivier Pain, from the Manet Created an oil sketch in 1881 (private collection), belonged to the small group of people who accompanied Rochefort on their escape. In this letter Desboutin alludes to the protagonist Robinson Crusoe from the novel of the same name by Daniel Defoe and his friend Freitag .

The meeting of Manet and Rochefort was not followed by a friendly relationship between the two. In addition to working on the painting, which was supposed to thematize Rochefort's escape, Manet Rochefort offered to portray him, to which he reluctantly gave his consent. After completing the portrait, Manet intended to give the painting to Rochefort, which Rochefort refused. Rochefort found a taste for works of art of a more traditional kind. In addition to works from the 18th century (mostly copies), his art collection included the portrait that Giovanni Boldini painted of him in 1882, as well as the busts created by Jules Dalou and Auguste Rodin von Rochefort.

When comparing the paintings created by various Rochefort artists, it is noticeable that in addition to Henri Rochefort in the Mazas prison, painted in 1871 by Armand Gautier , which shows Rochefort during his imprisonment in the Paris prison of Mazas , the painters Gustave Courbet , Giovanni Boldini and Manet Rochefort portrayed in a very similar way. All three painters chose a half-length portrait facing left against a dark background, and Rochefort wears the same clothes in all portraits. It is not known whether Manet was familiar with Courbet's painting from 1874, or whether Boldini was more oriented towards Manet or Courbet. In contrast to Manet, both Courbet and Boldini dispensed with crossed arms in their portraits and avoided Manet's depiction of the scarred facial skin.

Rochefort, which the after Manet's death Boulangisten joined, represented a virulent in his later writings nationalism and especially during the Dreyfus Affair a Semitism . The art historian Françoise Cachin already sees Rochefort's political change as a premonition in Manet's portrait of Henri Rochefort : “Although he painted with Manet's usual technical brio, this one is one of his more conventional portraits ... Nevertheless, the touch of charlatanry has not escaped him: the one with care arranged hairstyle from the head hair to the thin goatee as a sign of eloquence, terribilia, and intransigence. The iron eater peeps out from under the hero, the boulangist from under the republican. "

The portrait of Henri Rochefort was part of a group of five paintings that Manet sold to baritone Jean-Baptiste Faure for a total of 11,000 francs . This group of pictures also included such well-known works as Music in the Tuileries Garden and In the Winter Garden . Faure was one of the most important collectors of Manet's works and owned at least 67 of his paintings. About the Parisian art dealer Paul Durand-Ruel came Portrait Henri Rochefort in 1906 to Berlin, where the art dealer Paul Cassirer offered with other works by Manet from the collection Faure for sale. Alfred Lichtwark , director of the Hamburger Kunsthalle , saw this exhibition in October of that year and reported to the buying committee of his house: “There are still wonderful things there, especially the beautiful portrait of Rochefort and Bon Bock ... If I can choose would be provided to select one of the two images for the larger price I would the Rochefort give preference. "the Portrait of Henri Rochefort finally came in 1907 as the first Manet paintings in the collection of the Hamburger Kunsthalle, while the painting Bon Bock of Berlin collector Eduard Arnhold acquired . About the quality of the newly acquired portrait of Henri Rochefort , Lichtwark wrote: “In addition to the, of course, even more magnificent portrait of Dixboutin , Rochefort appears to me to be the most spiritual thing I know of Manet, despite all the great painterly virtues.” Dixboutin meant the painting The Artist in which Manet portrayed the etcher Marcellin Desboutin . When this picture was also up for sale at Paul Cassirer's premises in 1910 with the Pellerin collection , he tried to buy it and the painting The Singer Faure as Hamlet for the Kunsthalle. He remarked: "If we manage to get these two portraits, we have the three best portraits of Manet with the Rochefort ..." However, because of the high price, Lichtwark had to forego the purchase of the painting The Artist . Instead, the collector Arnold bought the painting and Lichtwark was finally able to secure a second Manet painting for the Hamburger Kunsthalle with Der Singer Faure as Hamlet .