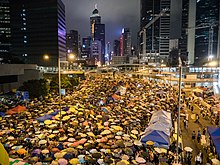 The protests opposed a resolution passed by the National People's Congress in Beijing at the end of August 2014 , which is colloquially known in Chinese as the “ 831 resolution ” ( 8 · 31 決定  /  8 · 31 决定 , bā sānyī juédìng , Jyutping baat 3 saam 1 jat 1 kyut 3 ding 6  - "decision of August 31") is called, according to the future, a 1,200-strong, the Chinese government formed Committee, the candidates for the election of Hong Kong's chief administrators ( English Chief Executive ) sets before the people of Hong Kong over the people can vote.

The participants in the protests either demanded free elections or at least the preservation of the previous regulation. They occupied parts of the financial and administrative districts of Central and Admiralty and blocked access to the seat of government. Smaller groups also occupy parts of Mongkok and Causeway Bay .

Rubbish collection from the occupied places arranged by the demonstrators. This “orderly” type of occupation led to the name “ Polite Revolution. "

The wave of protests was often referred to in the media as the “ umbrella revolution ” ( 雨傘 革命 , yǔsén gémìng , Jyutping jyu 5 saan 3 gaap 3 ming 6 , English Umbrella Revolution ) or “ Occupy Central ” ( 佔領 中 環  /  占领 中 环 , Zhànlǐng Zhōnghuán , Jyutping Zim 3 ling 5 Zung 1 waan 4 , short: 佔 中  /  占 中 , Zhànzhōng , Jyutping Zim 3 zung 1 ). However, the designation as " revolution " was rejected by the demonstrators. They stressed that their movement was not about a revolution, but about a demand for free elections. Some are also concerned about the aggressive undertone of the term and the provocation it has given the Beijing government. Instead, they called themselves the " umbrella movement " ( 雨傘 運動  /  雨傘 运动 , yǔsǎn yùndòng , Jyutping jyu 5 saan 3 wan 6 dong 6 , English Umbrella Movement ). The background for the term is the widespread use of umbrellas on the protest marches in order to protect themselves against sun and rain on the one hand, but also against the police use of pepper spray against the demonstrators, on around September 27th and 28th, 2014. From this the (mostly yellow) umbrella developed into a symbol of the protests.

The term “ polite revolution ” (the “polite” or “good” revolution) was also occasionally used, although this term mostly only appears in the non-Chinese-language press. This was justified with the courtesy of the demonstrators towards other demonstrators, bystanders and also police officers, and the fact that they disposed of their rubbish after the protests.

The further name " Occupy Central " is the general name for the occupation of the financial and government districts in the Central and Western district . The term is the most widely used term for the protests on the Internet portal Twitter and is based on the American Occupy movement.

The Sino-British Joint Declaration on Hong Kong , signed between the People's Republic of China and the United Kingdom on December 19, 1984 , set out how the city would be administered after reintegration. According to the principle of one country, two systems agreed between Great Britain and China, Hong Kong was granted the status of a Special Administrative Region in which the city has a high degree of autonomy.

When it was returned to China in 1997, the citizens of Hong Kong were offered free elections in 2017, which they were unable to do even under British rule. Until then, since 1997, every five years, Hong Kong election committees, which have been criticized for years for their composition and the dominance of business people loyal to Beijing, have elected the head of administration.

The three main groups behind the protests were the civil rights movement Occupy Central with Love and Peace , the Hong Kong Federation of Students (HKFS) and the high school student activist group Scholarism . Although these groups led the protests together, they had different demands.

The movement Occupy Central with Love and Peace around the law professor Benny Tai and the hedge fund manager Edward Chin , which is formed by university lecturers and other intellectuals, is considered the initiator of the protest movement to occupy Central. The original plan was to begin the occupation of Central on October 1, but this was brought forward a few days to take advantage of the political mood that emerged after student protesters were attacked with pepper spray and arrested by police. Occupy Central's first demand was to get the government to withdraw the resolution passed by the National People's Congress in Beijing at the end of August. The second goal was to demand that the government in Hong Kong introduce political reforms in the direction of further democratization and revise the report on political reforms already available on this.

The two groups of students had similar goals. The Hong Kong Federation of Students , led by Alex Chow , and Scholarism , led by Joshua Wong , called for the free direct election of the next local head of government in 2017 and the resignation of the current incumbent Leung Chun-ying .

Origin and course of the mass protests

After the resolution of the National People's Congress in Beijing at the end of August only provided for limited free elections for Hong Kong 2017, there was student protests on September 22, 2014, led by Scholarism and HKUSU , in which pupils and students were called to boycott classes. Around 5,000 schoolchildren and students protested illegally in front of the Hong Kong seat of government. On the evening of September 26, around 100 people stormed Civic Square , a public square adjacent to the seat of government and closed for months near Tim Mei Avenue. When the square was cleared, up to 78 people were arrested for trespassing on government property, disrupting the peace and quiet and gathering, including the use of pepper spray. Hong Kong Legislative Council Representative Leung Kwok-hung was among those arrested . After the civil rights movement Occupy Central with Love and Peace joined the student protests on the night of September 28, this culminated in the Hong Kong protests.

The police blocked the access roads to Tim Mei Avenue and the leaders of the protest movement called for a rally in the Admiralty district . The police then positioned themselves here as well and, after only a very short advance warning, used massive amounts of tear gas against the demonstrators. The use of tear gas against illegal but peaceful demonstrators motivated many other people to join the protesters. The number of demonstrators multiplied in the following days and was estimated by Western journalists to peak at 80,000 to over 100,000. On September 28, 2014, several places (next to parts of Admiralty, Causeway Bay , Mongkok ) in Hong Kong were confiscated by the demonstrators. After the tear gas operation in the Admiralty quarter, the police were also exposed to internal criticism and in the following time tried to be more moderate and to talk to the demonstrators. After the use of pepper spray and irritant gas, many demonstrators used umbrellas as a defense and the umbrella became a symbol of the movement.

The following public spaces or quarters or parts thereof were temporarily occupied:

On October 1, 2014, Joshua Wong and other Scholarism members attended the official flag-raising ceremony on the occasion of the national holiday in Golden Bauhinia Square. When the flag of the People's Republic of China was hoisted, all of the student representatives demonstratively turned their backs on it and made other gestures of silent protest. 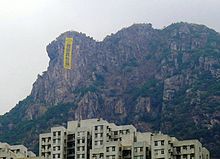 The evacuation of occupied Mongkok by the police on October 17, 2014 was unsuccessful because the demonstrators reoccupied the area that was initially evacuated.

On October 23, 2014, mountain sports enthusiasts climbed the Lion Rock and unfurled a huge yellow banner with the umbrella logo and the inscription " 我 要 真 普選  -" I want a real universal right to vote "". The banner was removed the following day at the behest of the Hong Kong government. During October there were repeated discussions between Hong Kong government officials and representatives of the Hong Kong Federation of Students (HKFS). Representatives of taxi, minibus and bus companies, whose businesses were severely affected by the blockades, filed lawsuits. On November 10, 2014, the Supreme Court of the Hong Kong ( English “The High Court of the Hong Kong” , 香港 diesen ) granted these complaints, thereby authorizing the eviction of the occupied places.

At the end of October and beginning of November 2014, the "Alliance for Peace and Democracy" ( 保 普選 保 和平 大 聯盟  /  保 普选 保 和平 大 联盟 , English Alliance for Peace and Democracy ) , founded on July 3, 2014 as a counter-organization to Occupy , collected according to its own statements 1.8 million signatures for a petition calling for the restoration of law and order and an end to the occupations. The validity of this collection was questioned by the demonstrators.

As public support for the week-long occupation gradually waned, police cleared the barricades and tents in Mongkok on November 25 and 26, 2014. After the eviction, demonstrators streamed again and police and demonstrators faced each other for a while, with the police again using pepper spray. More than 100 people were arrested, but most of them were released on condition that they would not be allowed to enter Mongkok in the near future.

On December 3, 2014, 65 activists from Occupy Central with Love and Peace (OCLP) went to the police and declared that they were responsible for the protests and that they would take legal responsibility. However, after brief interrogation, they were not arrested or charged. The day before, several prominent OCLP activists had publicly called on the demonstrators to end their occupations and to steer the movement into legal channels. This was rejected by the activists of the HKFS and Scholarism, but the vigor noticeably slackened and by December 15, 2014 the still occupied places in Admiralty and Causeway Bay were largely vacated without resistance.

On July 21, 2016, Joshua Wong was found guilty together with Alex Chow and Nathan Law as the responsible leaders of the large demonstrations in 2014. A Hong Kong court overturned the verdict in August 2017, sentencing Wong and Chow to six and seven months' imprisonment, respectively. Law received an eight month sentence.

Commons : Protests in Hong Kong 2014  - Collection of pictures, videos and audio files (subcategories and descriptions partly in English or Chinese)