This article explains the estates of the Holy Roman Empire. For other meanings see Imperial Estates of the Kingdom of Westphalia . 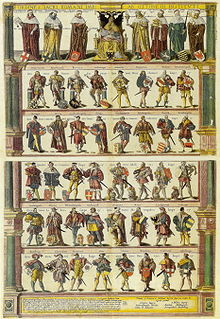 Symbolic representation of the imperial estates on an engraving from 1606

The imperial estates of the Holy Roman Empire of the German Nation were those persons and corporations that had a seat and vote in the Reichstag .

In the early modern period these were more than 300 ecclesiastical and secular princes , prelates , counts and lords as well as representatives of orders of knights and free cities and imperial cities . The imperial status could also be conferred by the emperor on those who did not have any territory ( personalists ). From 1654, however, it was necessary to own an imperial territory to acquire the imperial estate , i.e. H. a fiefdom that was awarded directly by the Holy Roman Emperor. In addition, the imperial license to practice medicine, admission to the relevant body of the Reichstag and the consent of the entire Reichstag as well as admission to a certain Reichskreis were necessary. In addition, the assumption of a certain contribution to the military burdens ( Roman month ) and to the maintenance of the chamber court ( chamber target ) was usually required. All imperial estates were recorded in the imperial register.

Since 1489, the ranks in the Diet of the Holy Roman Empire were divided into three colleges. A distinction was made between the Electoral College / the Electoral Council, the Imperial Prince Council and the College of Imperial Cities . The counts and gentlemen were not represented within the imperial council with individual or virile votes, but as members of initially two, later four count banks, each with one curiate vote .

Although the Imperial Knights were directly involved in the Empire, they were not represented as classes at the Reichstag; they tried several times in vain to gain at least a corporate imperial estate for themselves.

Business at the Reichstag

The consent of all three colleges was required for a Reichsschluss .

Each elector, prince and prince-bishop had their own voice in the Reichstag, the so-called viril voice (from the Latin vir for 'man'). The counts, on the other hand, were united in four colleges, the Westphalian , the Wetterauische , the Franconian and the Swabian Count Bank , each of which had only one common curate vote . The Free Imperial Cities also formed two colleges, the Rhenish and Swabian banks.

See also : Estates  and Quaternions of the Imperial Constitution