The 2014 America-Pacific Luge Championships were held from December 5th to 6th, 2014 as part of the 2nd World Cup race of the 2014/15 season on the Mount Van Hoevenberg Olympic bobsled run in Lake Placid , United States . There were competitions in the single-seater for men and women and the two-seater. All competitions were decided in two runs, the results of the World Cup races in the respective disciplines were used for the evaluation.

The titles all went to the US team. Erin Hamlin won in the women's singles, Tucker West secured the title in the men’s single and Matthew Mortensen and Jayson Terdiman won the doubles classification .

At the last America-Pacific Championships in 2013 in Calgary, Canada, the Canadian Alex Gough won in the women's singles, the American Christopher Mazdzer in the men’s singles and the Canadian two-seaters Tristan Walker and Justin Snith .

Date: December 6th
The US-American Erin Hamlin was able to secure the title in the women’s single-seater ahead of her teammates Emily Sweeney , Summer Britcher and Julia Clukey . Hamlin finished in second place behind the German Natalie Geisenberger in the World Cup race , Sweeney crossed the finish line in 5th place behind Tatjana Hüfner and Anke Wischnewski , Britcher came in sixth. Cluckey crossed the finish line in eighth place behind Dajana Eitberger . She was followed in 9th place by Arianne Jones as the best Canadian in 5th place in the continental championship ranking. Kimberley McRae , who reached 11th place in the World Cup race behind the Italian Sandra Robatscher , and Jordan Smith (16th in the World Cup race) followed in 6th and 7th place in the women's ranking. Sweeney, Britcher, Cluckey, Jones and Smith had qualified for the championship race through the Nations Cup. Hamlin and McRae were seated. 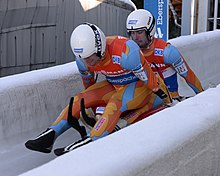 Date: December 5th.
Three pairs of doubles took part in the competition, for which only the Walker / Snith did not have to qualify via the Nations Cup because they belonged to the seeded group of the World Cup. The US-Americans Matthew Mortensen and Jayson Terdiman secured the title of the America-Pacific Championship , ahead of the Canadian defending champions Tristan Walker and Justin Snith as well as Justin Garret Krewson and Tristan Jeskanen . In the regular World Cup races, the winners Mortensen / Terdiman came in 6th, Walker / Snith came in ninth, the two-seater couple Krewson / Jeskanen in 13th.