Natalie Geisenberger (born February 5, 1988 in Munich ) is a German luger . She was double Olympic champion at the 2014 Winter Olympics in Sochi and at the 2018 Winter Olympics in Pyeongchang . At the Beijing 2022 Olympic Games, she won her third consecutive Olympic individual gold. She is a nine-time world champion, including four world champion titles in singles. She was also European champion six times. She won the overall World Cup eight times, seven of them in a row from 2013 to 2019. 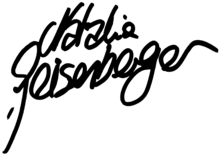 On January 20, 2007, Geisenberger contested her first World Cup race in Altenberg and immediately achieved second place. This secured her the nomination for the World Championships in Igls , where she surprised with fourth place. The highlights of her junior career were the 2004 Calgary World Junior Championships and Cesana 2007 , where she won gold with both the team and the junior women's competition. Natalie Geisenberger starts for ASV Miesbach . She became German Champion for the first time in 2007. Her career to date has been crowned by the European Champion title in 2008 in Cesana and the Vice World Champion titles in 2008 in Oberhof and 2009 in Lake Placid . In 2008, together with Felix Loch , she received the Bavarian Sports Prize in the category "Outstanding Young Athlete". On December 14, 2008, she celebrated her first World Cup victory in Winterberg . On February 16, 2010, Geisenberger won bronze in the single seater at the Olympic Games in Vancouver . In 2010 she won the title of German Champion for 2011.

At the 2013 World Championships in Whistler, she won both the individual and team relay titles. With victories in six of the nine World Cup races, she won the overall World Cup for the first time in the 2012/13 season .

On February 10 and 11, 2014, Geisenberger became Olympic champion in the individual race at the 2014 Winter Olympics in Sochi . She won all four heats by a combined margin of over a second, the second-largest margin in history. On February 13, 2014, she became Olympic champion again in the team relay together with the single-seater driver Felix Loch and the double-seater drivers Tobias Wendl and Tobias Arlt . For this she was again awarded the Silver Laurel Leaf on May 8, 2014 by Federal President Joachim Gauck . She was able to repeat the Olympic victory in the individual race on February 12 and 13, 2018 at the 2018 Winter Olympics in Pyeongchang . On February 15, 2018, she became Olympic champion in the team relay again, together with Tobias Wendl, Tobias Arlt and Johannes Ludwig . In 2014 , 2015 , 2016 , 2017 and 2018 she won the overall World Cup. In 2019 she won the overall World Cup for the seventh time in a row, further extending her own record. She also holds the record for women with 52 individual victories, other records are her five Olympic medals, including four Olympic victories. She was world champion nine times, four times in the individual and once in the sprint. She was awarded the Silver Laurel Leaf for her sporting achievements .

In October 2019, Geisenberger announced that she was suspending the current season due to her pregnancy. After the birth of her son in May 2020, she made a brilliant comeback. She easily qualified for the World Cup team and won the German championship in an outstanding manner on her home track in Königssee. At the start of the 2020/21 World Cup season in Igls , she only had to admit defeat in the two races, a classic individual and a sprint, to her compatriot Julia Taubitz , who succeeded her in winning the overall World Cup in the previous season. On January 17, 2021, she won her 50th World Cup race in Oberhof, having previously finished second eight times in a row during the season. At the end of the season, she was able to secure her eighth overall World Cup victory ahead of Julia Taubitz thanks to her consistent rides on the podium.

On February 7th and 8th, 2022, Geisenberger became Olympic champion for the third time in a row in the individual race at the Olympic Winter Games in Beijing with a track record in the third run.

In January 2006, she was employed at the Federal Police Sports School in Bad Endorf as a candidate for a police officer, on September 9, 2010, after passing the exam, she was appointed police officer and, after the 2014 Winter Olympics , senior police officer . She married her longtime partner Markus Scheer in June 2018 and is the mother of one son.

Natalie Geisenberger with the glass ball of the overall World Cup winner (Altenberg, 2017)