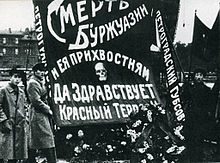 Guards at the grave of Moissei Uritski . Petrograd. Translation of the inscription on the banner: “Death to the bourgeois and their helpers. Long live the Red Terror. "(Beginning of September 1918)

The Red Terror was - in an avowed connection with the terreur of the French Revolution - the phase of state terror that the Communist Bolsheviks began in Russia after the October Revolution in 1917 , in which they used terrorist means against forces they understood as counter-revolutionary to enforce their claim to power . The term was coined by them and used as a public threat.

In the Russian Civil War it stood in opposition to the counterrevolutionary White Terror , which also raged until the end of the civil war, but unlike the latter was not strategically controlled and institutionalized. In contrast to the French Revolution, whose terror phase lasted a few months and which was mainly directed against the representatives of the aristocracy and opponents of the revolution, the leitmotif of the red terror was the sentence of the deputy head of the Cheka , Martyn Ivanovich Lazis , published in November 1918 in the magazine Krasnyi terror (The Red Terror), in the foreground: “We are not waging war against individuals. We are destroying the bourgeoisie as a class . "

In addition, the term “red terror” is occasionally used in Western parlance for human rights violations in real socialist states or for acts of violence by supporters of the Second Munich Soviet Republic (April 13 to May 1, 1919).

According to some historians, the terror began immediately after the October Revolution and was strongly supported by Lenin from the start . As early as 1908 he advocated putting opponents of a coming revolution “against the wall”. Lenin considered the radicalism of the Jacobins during the reign of terror to be exemplary and wrote in 1917 that the Bolsheviks, as the 'Jacobins' of the 20th century, had to do something “great, immortal and unforgettable”. Its first victims were leaders of the liberal Cadet Party , " striking workers " and "unruly peasants " and it intensified significantly after the two assassinations of August 30, 1918 on the chairman of the Petrograd Cheka Uritsky and on Lenin, which Fanny Kaplan was charged with .

The official beginning of the Red Terror - the Cheka as its main body was founded in 1917 - dates back to the decree of the Soviet government on the Red Terror of September 5, 1918:

“In the current situation it is absolutely vital to strengthen the Cheka […], to isolate the class enemies of the Soviet republic in concentration camps and thus to protect the republic against them; to shoot anyone involved in White Guard organizations, in conspiracies , uprisings and insurrections on the spot, to publish the names of those who were shot with an indication of the reason for the shooting "

The decree was a reaction to the aforementioned assassinations, but also to events such as the anti-Bolshevik uprising in Izhevsk , in which opponents of the Bolsheviks seized power and killed around 500–1000 people, mostly partisans of the Bolsheviks. These acts of violence were in turn a reaction to the sole rule of the Bolsheviks, which did not tolerate civil opposition. The red terror can therefore be regarded as part of a spiral of violence in which violence became a means of political conflict. In this phase, Lenin also insisted on the use of terror in order to carry out the revolution: “In Nizhny Novgorod , it appears that a White Guard uprising is being prepared. You have to harness all your energy, put together a troika of dictators, introduce mass terror immediately, seduce hundreds of prostitutes, seduce soldiers to drink, shoot and transport former officers, among other things, ”he telegraphed on August 9, 1918. Lenin sent one in on the same day Telegram to Penza and demanded: “The merciless mass terror against kulaks , priests and white guards must be carried out; dodgy elements are to be locked up in a concentration camp outside the city. ”On August 22, as chairman of the Council of People's Commissars, he ordered“ the conspirators and vacillators to be shot without asking for permission and without allowing the idiotic official meandering ”.

The period up to March 1921 (the beginning of the New Economic Policy , NEP) is referred to as the Red Terror and the era of the politics of war communism . Even after that, however, the shootings of opposition groups, deportations to forced labor camps (see Gulag ) and repression measures against dissident peoples continued. Ralf Stettner writes that “in the times of war communism, NEP and the transition years until 1928/29 a [...] network of concentration camps, forced labor camps and 'camps for special use'” existed. It was "wrong to assign the camp system exclusively to the Stalin era", even though the camps of the Lenin era were also "less important in terms of extent" compared to the later era of Stalinism . According to Stettner, the Soviet camp system was only at the beginning during the Leninist era, and the continuous development of capacities under Stalin naturally took many years to complete.

The "Red Terror" regime of the Cheka secret police received a legal framework from May 1922: Lenin developed Section 58 of the Criminal Code , which provided for forced labor and the death penalty for "political offenses". On May 17, 1922, Lenin wrote about his rough draft of § 58:

“The basic idea [...] is clear: openly set up a principled and politically truthful [...] thesis that motivates the nature and justification of terror, its necessity and its limits. The court should not eliminate terrorism - to promise that would be self-deception or fraud - but justify it in principle, clearly, without falsehood and without make-up, and enshrine it in law. "

Article 58 of the Criminal Code of the RSFSR was officially introduced by Joseph Stalin in 1927, who tightened it considerably; so he added " propaganda or political agitation " and "organizational activity" as violations of the law in addition to terrorism .

The violent action of the Cheka in the cities - the actual power center of the Bolsheviks - is regarded as red terror in the narrower sense. In the same context, the conflict between state power and the peasantry occurred, particularly with the well-off force farmers ( kulaks ) whose physical destruction Lenin with the policy of grain requisitioning operation. Around August 1918 Lenin had called on the “comrade workers” to take part in a “last, decisive fight”:

“You have to count about 3 million among the middle peasantry, and hardly more than 2 million are accounted for by the kulaks, the rich , the grain handlers . These bloodsuckers enriched themselves from the plight of the people during the war [...]. These spiders fattened themselves at the expense of the peasants ruined by the war, at the expense of the starving workers. These leeches have soaked themselves with the blood of the working people [...]. Merciless war against the kulaks! Death to the kulaks! Hatred and contempt for the parties that defend them. "

In the same month Lenin had already decreed: "Relentless mass terror against kulaks ...", "Convey to all members of the executive committee and all communists that it is your duty to ruthlessly crush the kulaks and to confiscate all grain from the insurgents".

The Red Terror was also directed against the bourgeoisie , against tsarist officers, non-Bolshevik socialists (above all Mensheviks , Social Revolutionaries ), clergy and opposition sections of the working class. The enforcement of the terrorist measures - such as shootings, torture and admissions to concentration camps - was carried out by the Cheka secret police, which was renamed the GPU from 1922 . Estimates put between 250,000 and 1,000,000 victims during this period, some of them through mass executions.

The Red Terror did not end with the Russian Civil War . During the forced collectivization of agriculture from 1928 to 1933 , the term “kulaks” was extended more and more to all independent farmers , so that the terror did not only apply to those farmers who were considered to be wealthy (→  deculakization ). In the mid-1930s, the Bolsheviks under Stalin began the Great Terror , which was directed against members of the elite as well as against ordinary Soviet citizens.