The CC 6500 was a French electric locomotive series for use on the DC voltage network of the French state railway SNCF . When they went into service in 1969 , the machines, approved for a top speed of 200 km / h, were the most powerful SNCF locomotives.

The CC 6500 began its career before the most important French passenger trains , including numerous TEE trains ( Le Mistral , Le Capitole or L'Aquitaine ). Due to its high pulling power, it was soon used in front of heavy freight trains.

Since 1967 locomotives of the BB 9200 series had been hauling the prestigious Le Capitole long-distance train , which connected the Paris Gare d'Austerlitz station with Toulouse via Limoges , in sections at a speed of 200 km / h. Due to the performance characteristics of these machines, however, the trailer loads were limited to 400 t. In order to also use passenger trains with over 160 km / h on the Paris – Bordeaux route , more powerful locomotives were required, especially since heavier Grand Confort (GC) wagons were to be used instead of the UIC wagons of the Capitole . Compared to the sub-series of the BB 9200, the CC 6500 had a 40% and 55% higher performance.

Locomotives 6501 and 6502 were delivered in August 1969 and immediately used for extensive tests. The 6503 followed on November 16 of that year, and from then on three more machines left the factory every month. The locomotives from 6501 to 6511 were the depot Lyon assigned -Mouche that the CC series was from February 2, 1970 6500th Their first missions were mainly in front of the Mistral , where they took over the services of the BB 9300 . From mid-February to mid-April, the 6512 to 6517 came to the Paris-Sud-Ouest (PSO) depot, and the 6509 was also moved there for tests. In March 1970, the latter pulled a 502-ton train from Paris to Bordeaux in just under 3:34 hours, which corresponds to a cruising speed of 162.7 km / h. On May 21, 1970, regular use of the CC 6500 began on the two sub-networks Sud-Est (Paris-Lyon- Marseille ) and Sud-Ouest (Paris-Bordeaux and Paris-Toulouse). Eleven locomotives ran in the Sud-Est network eleven schedule schedules , three of which they shared with BB 9300. The Sud-Ouest network initially recorded nine machines in five cycles, in September 1970 14 CC 6500s were already in use there. The operation in front of the Capitole did not take place until the following winter, as the route still had to be technically adapted. In this context, this train was also given the modern Grand Confort type of rolling stock.

On March 20, 1970, locomotive 6539 was delivered to Chambéry for use on the Ligne de la Maurienne in the Alps , where it was used in front of freight trains for around a year. In 1971, the 6541 drove there with a 781 t freight train on a ramp of 32 ‰ without any problems, which underlined the universal applicability of this series. 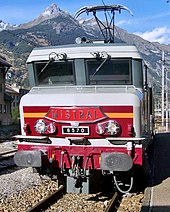 With the timetable of May 23, 1971, some express trains were upgraded to TEE trains for domestic French traffic. On the “Artère impériale” route from Paris Gare de Lyon to Marseille-Saint-Charles, the newly created TEE Le Rhodanien dethroned the Mistral as the fastest train. The TEE L'Aquitaine traveled from Paris to Bordeaux at an average speed of 144.8 km / h, with a 177 km long section traveling at 200 km / h. Since the power supply did not yet meet the new requirements, the trailer load had to be limited to 570 t, which was equivalent to ten GC wagons. At the TEE Capitole , the top speed could be increased from 170 km / h to 200 km / h on a 46 km long section, which enabled a travel time gain of 2 ½ minutes.

On July 1, 2007, the last machines of this type - after they had only been used on regional trains in the years before - were withdrawn from service.

CC 6572 in the Mulhouse Railway Museum

The locomotives have the typical design of the 1960s and 70s, the so-called " Nez cassés " (broken noses) by the Parisian designer Paul Arzens , which was already used in the machines of the CC 40100 and CC 72000 series . According to the principles of the engineer Fernand Nouvion , they had two different gear ratios and were therefore very versatile. They could pull heavy passenger trains at 200 km / h, but also haul freight trains over steep ramps.