Santa Maria in Via Lata 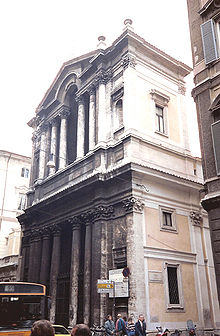 The facade by Pietro da Cortona

The Church of Santa Maria in Via Lata ( Latin: Sanctae Mariae in Via Lata ) is a Roman titular deaconry and rectorate church . It was built in the Baroque on much older predecessor buildings and houses the burial places of the Bonaparte family .

The church is in the IX. Roman Rione Pigna on Via del Corso (formerly Via Lata ) and directly at Palazzo Doria-Pamphilj , about 400 meters north of the Monumento Vittorio Emanuele II ; canonically it lies in the area of ​​the parish of Santi XII Apostoli .

The church stands on the remains of an ancient Roman building (a warehouse is mentioned, as well as a triumphal arch from the time of Diocletian and the Saepta Julia (assembly room of the Centuries )). There were also previous buildings of the 8th, 9th and the 10th century (see p. u. Lower Church ). The church was first mentioned in a document in 831. The previous building from the 10th century was rebuilt in the 15th century. With the exception of the facade, the church was given its current appearance by Cosimo Fancelli in the middle of the 17th century.

The facade, which was built entirely from travertine , was built by Pietro da Cortona from 1658 to 1662 as an independent structure in front of the church building. With the stage-like construction of the facade, he was guided by Andrea Palladio's buildings .

The middle section of the two-storey facade is slightly protruded between two narrow side wall fields framed by pilasters and is divided by a colonnade of four Corinthian columns ; the usual fluting of the columns was dispensed with. The central columns leave another opening for the entrance, behind the colonnade a portico gives the facade a great depth. The inscription DEIPARARE / VIRGINI SEMPER IMMACVLATAE / MDCLXII is embedded on the architrave .

The upper floor largely takes up the structure of the ground floor. The architrave is interrupted between the two central columns by a Syrian arch that protrudes into a flat triangular pediment.

The facade is in the development of Cortona after that of Santi Luca e Martina and before that of Santa Maria della Pace . Da Cortona adopted the structure of the first facade, but simplified it. In the second facade he leads u. a. the motif of the Doric order continues. Gianlorenzo Bernini adopted the strong plasticity and monumentality for his facade of Sant'Andrea al Quirinale .

The right side front is on today's Via Lata - a short side street that branches off from Via del Corso and opens into Piazza del Collegio Romano. The first part of the side facade is still formed by the facade construction and its pilasters . In addition, the side wall is then structured by a wall stripe, the upper end of which is similar to the Tuscan capital design. In the wall fields formed by these architectural elements are the half circular ring windows of the right aisle, which are framed by profiled round arches. Between the second and third window is the coat of arms of Pope Innocent VIII.

The left side front is completely built in.

The campanile is on the left side of the church and is the work of Martino Longhi the Elder from 1580. It is set back from Via del Corso and is just as invisible in the basement as the entire left side of the church. The first visible floor is relatively high and has pilasters in the Tuscan style at the corners. On all four sides of the bell storey, which is located above the cornice of the church, there are high, open arched windows. At the edges there are volutes that bear capitals in the Ionic style above the curl . Above the final cornice of the campanile there is a segment gable on each side, which is covered by a spherical lead cover.

The church was built as a three-aisled basilica . The columns between the main and side aisles are made of reddish colored marble. A protruding surrounding cornice above the arcade arches, which also runs through the high altar, gives the interior a clear structure. The church was renovated by Cosimo Fanzago in 1639 and is designed in a rich baroque style and color variety.

The floor of the church shows remains of cosmatic works .

The painting of the Virgin Mary on the main altar from 1636 is attributed to Gian Lorenzo Bernini . Its authorship is not certain.

Buried in the church are Joseph Bonaparte and Lucien Bonaparte (left side) with other family members, also Antonio Teobaldo , a friend of Raphael ; he died in 1547, his tomb dates from the 18th century (left aisle).

In the basement of the church you can see the remains of previous buildings, on the walls frescoes from the 8th, 9th and 10th centuries. In the fourth underground room there are frescoes from the 8th century; The theme is the life of St. Erasmus . The frescoes are iconographic , they are an example of the strong influence of Eastern Mediterranean art at that time , along with those of San Saba .