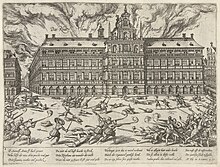 The Spanish Fury ( Dutch Spaanse Furie ) is the looting and burning of Antwerp , combined with the slaughter of many of its inhabitants, during the Eighty Years' War (1568–1648). The word 'fury' is believed to have been derived from the mythological goddesses of vengeance, furies .

On November 4, 1576, mercenary troops in Spanish service began the looting, which turned into three days of atrocities in the city, which at the time was considered the cultural, economic and financial center of the Spanish Netherlands . The cause of the inglorious events were months of outstanding pay payments to their troops by the Spanish crown.

King Philip II declared Spain's second national bankruptcy on September 1, 1575 (the first was in 1557). A lack of money made payments to the troops deployed in the county of Flanders impossible. The royal house fought the rebellious Protestant northern provinces with the army . Some units there had been waiting for their payment for two years. This was the reason why in the Netherlands, in addition to military campaigns, they had to make raids among the population for their food and other needs.

When the city of Zierikzee was taken, the Spanish soldiers were not allowed to plunder the city or to indulge in other victorious whims, such as rape or the killing of male residents, in a departure from the usual practice. Philip of Spain had forbidden this to avoid further unrest in the Dutch areas.

The Spanish soldiers, tired of fighting numerically inferior against troops of the rebelling Protestants, without any major rest, without their pay and moreover without a leader after the death of the Spanish governor Luis de Zúñiga y Requesens , mutinied. The first thing they did was lock their officers up in the Zierikzee quarters. Then the mutiners decided to take the cities harmless and decided to go to wealthy Antwerp to “pay for themselves”. They marched through Brabant and Flanders, from the northern Netherlands to the wealthier southern part.

In July 1576, a unit of troops captured the peaceful city of Aalst . The mutineers massacred all residents and took possession of the previously prosperous city. Their troop strength had grown to 3,000 men. As a result, the States General decided on July 26, 1576 that the population should arm themselves in order to drive out every Spaniard, soldier or not, and hired Walloon and German mercenaries who were now to fight the foreign troops alongside the Dutch rebels from the northern provinces. At the beginning of September the Spanish officers joined their mutinous men.

Apart from the provinces of Holland and Zeeland , only Brussels was firmly in the hands of the rebellious Dutch. The castle fortifications in Valenciennes , Ghent , Utrecht , Maastricht and other cities were secured by Spanish veteran units. Maastricht succeeded in briefly driving the Spaniards out of the city in October with the help of a German garrison. After the city was retaken and sacked on October 20, 1576, the Spanish troops turned to Antwerp, where they suspected enough gold and goods. The citadel of Antwerp was already held by a Spanish unit under Sancho d'Avila .

On November 3, 1576, the new Spanish governor, Don Juan de Austria , arrived in the Netherlands, but too late to calm the pent-up resentment in the army. He was powerless against what was happening in Antwerp.

City commandant Champagny could imagine that the city was inferior to the advancing Spaniards with only a small group of German mercenaries of Count Oberstein and asked for support. He then received a Walloon regiment from the States General for reinforcement. D'Avila had meanwhile managed to get a written promise from the slightly drunk Oberstein that the citizens should be disarmed and that their weapons should be surrendered in the citadel .

The next day, on November 3, Oberstein, who had sobered up, decided to ignore the paper and d'Avila's request to implement the agreement. When nothing happened in the following hours, d'Avila had the city bombarded with cannons from the citadel . The citizens then began to build a protective wall in order to position cannons in the direction of the citadel.

On the morning of November 4th, there was heavy fog until 10 a.m. The Spanish mercenaries arrived outside Antwerp and they managed to get into the fortress and unite with the soldiers stationed there as well as mercenaries who had come from other places. Sensing the situation, Champagny concentrated his forces in the city, while the Walloon regiment and German mercenaries were posted across from the citadel. The city's walls were weak, but were also reinforced with about 6,000 citizens.

It was noon when about 5,000 Spanish foot soldiers and 600 cavalrymen left the fortress. The posted Walloons ran away after contact with the enemy and the battle-tested Spanish warriors flooded over the human barrier on the ramparts. The Spaniards reached the streets of Antwerp without a fight. Champagny hastily rallied a German unit and began organizing resistance. The Germans were brave and fought to the death, but could not make up for the lack of Walloon forces in retreat. Champagny, galloping back and forth, finally urged the citizens to defend their houses. But the enemy was strong, disciplined, resilient, literally boring the poorly equipped citizens down and trampling them to the ground.

The mutineers and the fortress garrison were able to gain the upper hand in the streets of the city. The carnage was enormous. When Champagny saw that a successful resistance was out of the question in the to-and-fro movement of refugees and conquerors, he and some Dutch fled. Oberstein lost his footing while trying to get into a boat and drowned in the river.

The short November day was drawing to a close when the last resisting citizens had gathered in the square in front of the town hall. Houses that the Spaniards had set alight with torches were already burning around them. While the mayor, the senators, soldiers and citizens fell in battle near him, the margrave of the city heroically took on the enemy with the courage of desperation. The resistance ended with his death. A few insurgents fled to the town hall, which the Spanish soldiers set on fire. They also started other fires in the city. Immediately afterwards, the Spaniards began looting.

The battle cries were ominous: Santiago! España! A sangre, a carne, a fuego, a sacco! (Saint James! Spain! Blood, meat, fire, looting!) To learn hiding of assets, victims were tortured in front of the closest relatives, killed infants in the arms of the mother, women before the eyes of her husband raped or whipped city dwellers to death .

Men were headed. There were executions. Dogs feasted on the blood of the dead. Between 8,000 and 10,000 people died and large amounts of property were lost when the approximately 600 to 800 houses burned to the ground in a propagating fire. Survivors of the battle were either slaughtered or drowned in the Scheldt . The cruelty and destruction of those three days of frenzy came to be known as the "Spanish Fury". The raging continued for a while, because the mutineers took wealthy citizens hostage to extort money from them.

Before the massacre, Antwerp had around 80,000 to 125,000 inhabitants. After the three terrible days, more than a third of their homes were in ruins.

The shocking event alienated many in the Netherlands, even Catholics , from the monarchy of the Spanish Habsburgs and clouded the already damaged reputation of Philip II. All of the incidents promoted the Ghent pacification on November 8, 1576, in which almost all Dutch people are now Provinces, including the southern provinces that had been loyal to the Spanish court during the Eighty Years War, joined the struggle for freedom.

The "Spanish Fury" ended ten years of Spanish efforts to regain power over the rebellious provinces in the Netherlands.

On August 1, 1577, the Antwerp people succeeded in moving the Spanish garrison to evacuate the citadel and to remove all foreign troops from the city by paying the arrears wages and large sums of money to the commanders. After the mutineers left the city, the townspeople destroyed the citadel built by the Spaniards.