This article deals with the grammatical , phonetic and lexical basics of Esperanto . 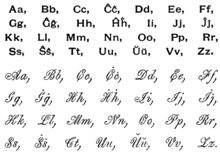 Printed and handwritten letters of the Esperanto alphabet

The Esperanto alphabet consists of 28 letters. Each letter corresponds to a speech sound . The sounds essentially correspond to the German ones, the special characters have the following equivalents:

The letter Ŭ is never at the beginning of a word, so it is only needed in the lower case .

The vowel length does not distinguish between the meanings: you can pronounce vowels as short, medium or long as you like. Nevertheless, there are certain tendencies to pronounce the vowels short or long, depending on the situation. For example, a vowel is usually pronounced long in a stressed syllable if it is not followed by more than one consonant, e.g. B. simila [si'miːla], but rezisti [re'zisti].

This vowel length is often retained even with apocopes of the o-ending of the nouns, so that minimal pairs are created that only differ in terms of the length or shortness of the vowel. Example: [viːn] "wine", but [vin] "you".

Esperanto has five vowel phonemes: a , e , i , o , u . Each of these vowels forms its own syllable. The half vowel ŭ sounds like the short vowel u, but does not form a separate syllable.

In polysyllabic words, the penultimate syllable is always stressed. With the elision (see below) the ending -o counts; so the last visible syllable is stressed.

Examples (the stressed vowel is provided with an otherwise not written accent ( acute ) for clarity (cf. Spanish )):

In Esperanto, the words can be divided into two groups: On the one hand, ending words (finaĵvortoj), which have an ending that defines the part of speech / word function in more detail; on the other hand, particles (vortetoj).

The ending words can be divided into verbs, O-words (nouns), A-words (adjectives) and E-words ([derived] adverbs). Verbs have one of the verb endings -i , -as , -is , -os , -us or -u . O words always end in -o , A words always end in -a , E words always end in -e . These three parts of speech are often referred to as "nouns", "adjectives" and "derived adverbs"; However, this designation feigns an asymmetry that does not exist in Esperanto: It forces you to divide the adverbs into two groups ( "derived" adjectives ending in -e and adverbial particles), but does not do this with the adjectives and nouns, although there are also adjectival and noun particles (e.g. iu , ĉio ).

If the noun ending -o is not followed by any further grammatical suffixes, the -o can be elided (left out). The elision is always made visible by an apostrophe (').

There is no indefinite article (Tie estas telefono (or telephone '). - There is a telephone there.) And a definite article that is not bent: la . Although the rules for applying the particular article are similar to those of the German language, there are some differences: B. is in Esperanto, unlike the Germans before abbreviations usually set no definite article (NATO sendis soldatarojn -. The NATO sent troops.)

The plural ending is -j . It is attached to O-words (nouns), A-words (adjectives) and some noun and adjectival particles.

However, there are also particles that do not end in j despite their plural meaning : ni (we), ambaŭ (both).

Esperanto has regular endings for these grammatical tenses :
-is - past tense
-as - present tense
-os - future tense

The verb has only one form in all conjugated tenses, regardless of person and number.

The ending of the present tense is -as :

The ending of the past tense is -is :

The ending of the future (future) is -os :

The ending of the conditional is -us :

The ending of the imperative is -u :

There is an active and a passive participle in every time stage ; the vowel is the same as in the personal forms. The participles can be used as adjectives and nouns (to denote a person), and sometimes other complex verb forms are formed from them (see below).

The active forms with non-idiomatic translation are

The passive forms are

Examples of compound times in the active :

Occasionally, other simple tenses are derived from the participles, which Wennergren calls “abbreviated compound verbs”. Forms on intus are often among them:

Esperanto has a number of semantic prefixes and suffixes that can be used to compose new words. A small selection should be mentioned here briefly:

mal- (expresses the opposite)

You can also combine several prefixes and suffixes, whereby the order of the affixes must be observed.

These semantic suffixes can (in contrast to the grammatical ones) also be understood as word stems to which in turn derivation suffixes can appear, e.g. B. ejeto - small town. This becomes problematic when directly combining prefixes and suffixes. So is z. B. not clear whether malega should mean small , or completely opposite. Such words have to be learned as separate vocabulary.

The following words can be formed with the help of the word stem telephone and the word class suffixes:

With the help of the semantic word formation syllables, further words can be formed:

With the help of the participles further word formations result:

In contrast to natural languages, the word formation explained above takes place as regularly as possible. This makes learning vocabulary much easier.

The tabular words ( Zamenhof's table ) are forty-five words of different types of speech (including the interrogative pronouns / adverbs and demonstrative pronouns / adverbs), which are systematically made up of the five prefixes ti- , ki- , ĉi- , neni- and i- and the nine suffixes - o , -u , -a , -el , -e , -am , -om , -al and -es are composed and can therefore be easily represented in tabular form.

The indicative words become neutral or distant meaning ("those"); by preceding or following ĉi , closeness can be expressed explicitly (factual, spatial, temporal, etc.): tio - “that” (neutral) or “that”; ĉi tio or tio ĉi - "this". tial - "because of this" (neutral) or "for that reason"; ĉi tial or tial ĉi - "for this reason".

In natural languages ​​such as French ( combien, comment; quelqu'un, quelque part, quelque-fois ) and German ( when? Then; what? That; who? Der ) there are also approaches to an at least apparent system, which is not however consistent as the table shows as an example for the German language. 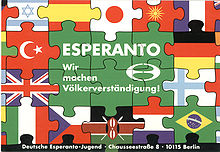 It is sometimes said that Esperanto is a language puzzle .

The Esperanto vocabulary comes for the most part from European, primarily the Romance languages , also from German and English , and to a lesser extent from Slavic languages , Greek and other languages. Esperanto words often go back to related word variants in several languages. In a number of cases they represent forms of compromise between them.

In the more than one hundred years of its existence, Esperanto has developed similarly to a naturally developed language - new words that are used in everyday language , in magazines or in literature find their way into dictionaries after a while . In some cases, new words also appear first as coins of lexicographers in dictionaries and from there gain popularity. Some of these words will be included in the official vocabulary of the Esperanto Academy and will henceforth be part of the generally binding principles of the language. The Academy also monitors other aspects of language development and makes recommendations from time to time, e.g. B. on country names. Foreign words are used in Esperanto according to rule 15 of the Fundamento de Esperanto . One of the new words is mojosa, an acronym from moderna-junstila, equivalent to English cool.

Play media file
How to count on Esperanto

Cardinal numbers from 1 to 10:

From this the numbers up to 99 are put together as follows:

At zero, usage is variable.

Ordinal numbers are formed with the ending -a (adjective ending) and, in contrast to cardinal numbers, are inflected like adjectives

The most important specialist dictionaries are updated regularly.

The technical vocabulary also tends to be unambiguous, in accordance with the principles of language. For example, moment in the sense of “time instant” means momento . If, on the other hand, one speaks of physical properties such as torque , moment of inertia or angular momentum , one uses momanto .