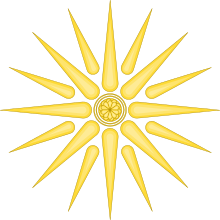 The "Star of Vergina", as it can be found on the Larnax box that was found.

The so-called Star of Vergina ( Greek Άστρο της Βεργίνας , Macedonian Ѕвезда од Кутлеш ), more aptly also the Sun of Vergina (Greek Ήλιος της Βεργшνας , called Macedonian sun symbol ед ​​сонце о mostly sixteen sun symbol) . In the opinion of the Greek archaeologist Manolis Andronikos (1919–1992) it is “probably the royal emblem ” of the time of Philip II (382–336 BC) and Alexander the Great (356–323 BC), the kings of Macedonia from the Argead dynasty. The symbol is therefore also known as the Argead star (Macedonian Аргеадска ѕвезда ) or sun . In complete contrast to this scientifically dubious emblematic interpretation is the importance assigned by North Macedonia and Greece to this so-called “Macedonian Sun” (Greek Μακεδονικός ήλιος , Macedonian Македонско Сонце ) as a national symbol . 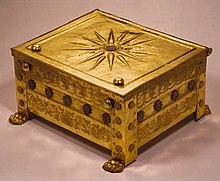 The "Golden Larnax" with the sun symbol found in 1978 during excavations in Vergina .

Twelve-pointed sun symbol on an ancient drachm from the 4th century BC.

On November 8, 1977, the archaeologist Manolis Andronikos discovered unplanned ruler's graves near Vergina in the Greek region of Macedonia . In a grave in 1978 were two golden Larnax -Schatullen with bones found. The male bones in the larger larnax were also wrapped in a purple cloak and an oak leaf made of chased gold and an acorn crown were enclosed. Andronikos suspected that the grave probably belonged to Philip II . However, this identification is controversial.

The sixteen-pointed “star” is depicted on the lid of the large larnax of the male ruler. On the lid of the little Larnax attributed to a widow , a twelve-pointed “star” interpreted as a “ rank ” is depicted. In addition, remnants of the sun symbol appear on found shields and often on Hellenistic coins . The interpretation as a “royal emblem” is justified by Andronikos with the accumulation of the symbol in connection with this grave.

The widespread use of similar “stars” with different numbers of rays in both Greek and non-Greek art as a simple ornament offers considerable doubts about this interpretation . This sun symbol appears, among other things, on the shoulder of a warrior who is depicted on an Athenian grave stele . Accordingly, the “Star of Vergina” would be nothing more than a more or less randomly selected decor by a craftsman.

See also : The star of Vergina in the article flag dispute

Unofficial flag of the Greek region of Macedonia

When the regions of Greece were abolished in 1987 (later reintroduced), a flag developed into the identity-creating symbol of the Greek Macedonians , showing the “Star of Vergina” in gold on a blue background. The flag never gained official status as the Greek government misinterpreted this as a separatist move. However, it also came into official use, e.g. B. two units of the Greek armed forces use the symbol on a shield depicted in their flag.

The "Star of Vergina" was part of the first flag of the state of Macedonia from 1992, which was not recognized by Greece. This flag went back to the intervention of the nationalist diaspora overseas and sparked an unprecedented propaganda battle.

In February 1993 the Greek Parliament declared the star of Vergina to be the symbol of the Greek Republic. In 1994 Greece imposed a trade embargo on Macedonia and closed the borders with the neighboring country. In 1995 Greece claimed exclusive international rights for the “Star of Vergina” from the World Intellectual Property Organization (WIPO).

In the late summer of 1995, both states were forced to find a temporary solution in New York : Greece ended the embargo and accepted the acronym FYROM (Former Yugoslavian Republic of Macedonia) as the state name of Macedonia. Macedonia replaced the “star of Vergina” in the flag with an eight-pointed sun.

Logo of the nationalist Macedonian magazine Makedonsko Sonce with the “Star of Vergina”.