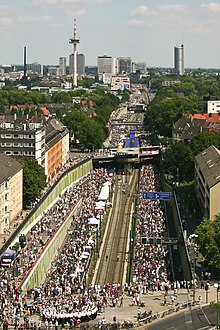 Dismantling the row of tables

Still-Leben Ruhrschnellweg was a key project of RUHR.2010 - European Capital of Culture in the field of celebrations .

On Sunday, July 18, 2010, the federal highway 40 and parts of the federal highway 52 and the federal highway 1 from Duisburg (exit Duisburg-Häfen) to Dortmund (exit Märkische Straße) were closed to motorized traffic and for people without a car or similar. Approved. The route, also known as the Ruhrschnellweg , is around 60 kilometers long and runs in or near the cities of Oberhausen , Mülheim an der Ruhr , Essen , Gelsenkirchen and Bochum .

As early as 10 p.m. on July 17, the A40 and B1 were closed to motorized traffic for the planned 60 kilometers between the junctions Dortmund Märkische Straße and Duisburg-Häfen . In the direction of Duisburg, on the night of July 17th to 18th, 2010, the THW set up around 20,000 beer sets , where groups, clubs, families, neighborhoods, institutions, etc. were allowed to present themselves with their own program. On this side, visitors were only allowed to move around on foot.

For a group of tables with space for ten people, which cost around 25 euros, you had to apply online, stating your preferred location. These tables were then awarded by drawing lots. The official application phase began a year earlier, on July 18, 2009.

For all types of non-motorized vehicles (bicycles, scooters, inline skates, etc.), the lanes in the opposite direction (direction Dortmund) were released as mobility lanes . Access to or exit from the expressway was only permitted at the connection points, as was a change between mobility and table lanes.

The route was closed to motorized traffic for a total of 31 hours from the evening before until the early morning of the following day. After the Still-Leben was opened on Sunday morning by the chairman of RUHR.2010 , Fritz Pleitgen , and its managing director, Oliver Scheytt , together with North Rhine-Westphalia's Prime Minister Hannelore Kraft , visiting the entire route from 11 a.m. to 5 p.m. was free possible. Estimates assume "millions of visitors". No special incidents were reported, but driveways were closed several times, especially in the afternoon due to the large number of visitors.

After the event ended on July 18, 2010 at around 5 p.m., all visitors had to leave the Ruhrschnellweg, which was completed at 6:15 p.m. Then all the beer table sets of 60 THW groups were folded up and loaded onto trucks, the more than 2000 mobile toilet cabins were pumped out and loaded and the first barriers to the exits were removed after 9 p.m. After street cleaning and inspection drives, the A40 was opened to traffic again shortly after five o'clock on July 19.

For the arrival and departure, the Verkehrsverbund Rhein-Ruhr offered reinforcement trips on the S-Bahn lines and the local transport companies on light rail and bus lines. In the Essen / Mülheim area, in addition to additional traffic, there were also restrictions in local public transport , as the U18 tram and the track bus lines 146 and 147 were not allowed to run in the median of the A40 during the full closure. The information flyer for the event, which was also picked up in the daily press and published on the Internet, provided information about how to get there. As bicycles were not allowed on public transport for reasons of capacity, it was recommended that cyclists use the NRW cycle route planner or use the “Park & ​​Bike” spaces.

Both directions of travel were regularly equipped with refreshment stations (Edeka trucks with stalls for chilled drinks, fruit and snacks as well as memorabilia), waste bins, first aid stations, mobile toilets and emergency vehicles from the Malteser relief service , the DRK and the THW. The latter also blocked exits at motorway junctions that were not allowed to be used because the streets crossing were still used.

For the use of a table, there was a multi-stage registration process with a drawing of lots and a fee for table use. The first raffle ran until October 1, 2009; Tables were awarded in 2010 from around 6,000 applications. Your own program had to be presented in the application process. For example, the Wikipediastammtisch Ruhrgebiet was represented. The program was supplemented outside of the tables by the neighboring towns, who presented themselves on their own stages, and campaigns by the State Sports Association of North Rhine-Westphalia with the city and district sports associations, which encouraged people to participate in sports on so-called sports islands. On the mobility lane, the ADFC NRW presented the “longest bicycle museum in the world” at seven stations, which began at the first station in Duisburg with a look at the beginnings of the bicycle and ended in Dortmund with a look at the future of electromobile cycling. Further cooperation partners were the THW , which secured the connection points, the Landesbetrieb Straßen.NRW and the Verkehrsverbund Rhein-Ruhr .

In spite of the usage regulations, political activists also appeared here and there.

Likewise, the crossing of the median was not prevented as rigorously as announced.

The campaign was financed by the income from the allocation of tables and by the sponsors DB Schenker , Edeka Rhein-Ruhr and the hardware store chain Hellweg . The latter sold the used placemats as souvenirs.

There was criticism of the diversions and parking spaces required on the day of action. A construction project on the A40 showed the traffic problems that arise in a small area. A full closure of the entire route at the same time as the onslaught of table users and visitors should - according to fears - lead to considerably more traffic problems. Furthermore, the financing of the street cleaning after the end of the campaign had not been clarified until the end of 2009.

The expected traffic chaos did not materialize, and the extensive diversion via the A2 and A42 motorways went smoothly. However, the rail traffic in particular was overloaded by the onslaught, and regional trains often ran late.