The Minden tram was the tram system of the East Westphalian city ​​of Minden in North Rhine-Westphalia . It was meter gauge and was operated with 600 volts direct current. The original operating company was the Minden Steam Tram Company , which was established in 1893 . In March 1914, the shareholders of the city of Minden, Elektrizitätswerk Minden-Ravensberg GmbH (EMR) and the province of Westphalia finally founded the Minden GmbH tram . From 1928 the EMR was the sole shareholder , later the "EMR Kraftverkehrabteilung" emerged from it. The first steam tram ( small train ) was opened on September 7, 1893, but electrical operation could only be started after the First World War on December 8, 1920. Between 1956 and 1959 all tram lines in Minden were shut down.

From 1892 the state train station and the city center of Minden were to be connected by a horse-drawn tram . Since the supervisory authority did not approve the city's project due to the narrow streets, a horse-drawn bus line was opened on December 1, 1892 . When in 1889 the state parliament of the Westphalia province decided to erect a memorial to Wilhelm I, who had died in 1888, at Porta Westfalica and construction began in 1892, the city of Minden called a citizens' assembly on July 8, 1892 to review the construction that had been planned for some time a rail link between Minden and Porta Westfalica. On October 8, 1882, the Minden Steam Tram Company was founded with a capital of 48 shareholders and a sum of 150,000 marks . On May 15, 1893, it received the concession for the construction and operation of a line defined as a small railway , and construction began at the end of July of the same year.

The train was on August 31, 1893 structurally removed and officially opened on September 7, with two special trains. It led from the former Tonhalle via Portastraße and Bad Minden to Fährstraße in Porta. When the connection of the state railway in Minden with the help of a horse-drawn tram could not be implemented again at the beginning of the 20th century, the company was sold to the city of Minden in 1914. Thereupon the "Straßenbahn Minden GmbH" was founded as a subsidiary of the Minden-Ravensberg electricity company and the planning of further lines into the area around Minden began. The following routes were planned:

An extension of the existing small railway to Bad Oeynhausen was also discussed. However, the administration of the district of Minden came before the implementation of these plans by building its own lines, which were then operated by the Mindener Kreisbahnen : Minden – Uchte (1898), Kutenhausen - Wegholm (1915), Minden – Lübbecke (1903–1907) and Minden– Kleinenbremen (1918–1921). 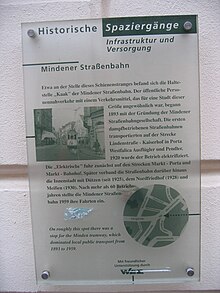 Reference to the historic Kaak stop

The electric tram planned for 1907 between the city center of Minden and the state train station was postponed until after the construction of the new Weser bridge between 1911 and 1915, as the old bridge from 1874 was not strong enough. In the course of this construction project, two tracks for the tram were planned, but not yet installed. Electrical operation was not started until December 1920 because of the First World War.

Tram Minden GmbH was founded on March 26, 1914 . In addition to the city and province (and at times the district of Minden), the shareholders were also the Minden-Ravensberg electricity company . The new GmbH acquired the Mindener Dampf-Straßenbahn GmbH and began electrifying the line. In addition, new routes were laid in the city. Between February 1 and March 17, 1923, the railway was shut down due to high inflation . Thereupon the contractor Weber from Porta Westfalica leased the railway and continued the operation on his own account. On April 1, 1924, the lease was terminated and the GmbH was able to carry out the trips under its own management again.

In 1926 the district, in 1928 the city and the province of Westphalia, gave their shares in the railway to the Minden-Ravensberg electricity works (EMR Kraftverkehrsabteilung), which was then the sole owner since June 6, 1928. During the Second World War , traffic was completely stopped between April 3, 1945 and June 1, 1945.

The depot was located on Portastraße (demolished in 1977, today Minden Road Traffic Office). At the Poos (Scharn, corner of Bäckerstraße) there was a track triangle . An hourly service was offered, which was compressed to half-hourly intervals on some routes or in rush hour traffic. The transfer hub was the market, from here in the 1930s trains ran every 10 minutes via Poos and Bäckerstraße to the train station; In the 1950s, there was still a 15-minute cycle on this section, despite falling passenger numbers. The passenger numbers on the eastern branch of the line from the train station to Meißen were disappointingly low for the company. There were very early considerations to introduce a one-man operation.

After the war, EMR GmbH Kraftverkehr operated four lines with a length of 14.9 kilometers. Since private transport severely impaired the long sections, which were only single-track, and new settlements emerged away from the routes, it was decided to replace the tram. The planning for this began in the early 1950s. They initially thought of a replacement with trolleybuses and wanted to set up a trolleybus network. To this end, the company built a first “test route” in 1953 on the right bank of the Weser as part of the existing intercity bus route 8 to Holzhausen and Vlotho . After completion of a new bridge over the Weser between Barkhausen and Hausberge (now part of the city of Porta Westfalica ) at the end of May 1954, a branch line to the final stop at Porta was served. That was the first step towards the actual replacement of the tram, the trolleybus should also run on the left side of the Weser to Hausberge. However, a lack of flexibility in the trolleybus operation was quickly recognized. So the decision was finally made to replace the tram not with trolleybuses but with buses. At the time, local public transport in a medium-sized city could only be managed sensibly with one mode of transport - the diesel bus. Ultimately, trolleybuses did not replace any of the tram lines in Minden. The Minden trolleybus operated until 1965.

The tracks and buildings were torn down, the only relic that remained was the waiting hall (at that time with a sales stand and café) at the terminus Porta, Kaiserhof. The vehicles were scrapped, only the 115 sidecar remained and is now in the Herford City Museum .

Two overhead line rosettes and the outline of another can be seen on the Wilhelminian-style buildings in Kaiserstraße .