The town hall of the Hanseatic city of Stralsund is a building built in the style of the north German brick Gothic , the construction of which dates back to the years 1300-1310. Up to the 19th century, constant extensions and renovations ensured a mix of architectural styles. The building on the Alter Markt is one of the most important secular buildings in the Baltic Sea region and is also the landmark of the Hanseatic city of Stralsund . It stands in the core area of ​​the city ​​area recognized by UNESCO as a world cultural heritage site as part of the historical old towns of Stralsund and Wismar . In the list of monuments of the state of Mecklenburg-Western Pomerania it is registered as a monument with the number 10.

The beginnings of this building go back to the beginning of the 13th century; Around 1230 work began on the original construction. The building template for the Ratskeller with ribbed vault was the Kampische Hof in Stralsund. The Cistercian monks brought this elegant architectural style to the north of Europe after Christianization . After 1280 this architectural style was no longer used. The Ratskeller Stralsund was created as a uniform storage room with 1400 square meters and is therefore the largest connected cellar in Northern Europe. Merchants and councilors brought the goods to the old market cellar using slides . Later traders deposited cloth and wine, even from Mâcon (France). Stralsund received city ​​rights in 1234 . The first entries in the city register are dated between 1271 and 1278;

Initially, the building served as a cloth store for expensive cloths from Belgium and as a department store ( kophus ). This is documented in the wing structures.

During the 14th century, the Stralsund town hall underwent several significant expansions. By 1340 the building was supplemented to the north and south by meeting rooms for the city council, a large hall and the façade in 1444 to the old market in the north. The facade was richly decorated with figures and the coats of arms of the princes Erich von Lüneburg, Guntzel von Wittenberg, Albrecht von Obersachsen, von Dannenberg and two others, who were defeated in 1316. The hall, which can be reached from the Alter Markt, housed meat banks and the Lübeck tree , a municipal court arbor .

Until the 16th century, the consultation rooms could only be reached via a spiral staircase with a square floor plan, which led from the basement to the council chamber on the first floor and from the south side in addition to the eastern side wing. In 1579, the councilors had a stone staircase built in the Renaissance style on the north side of the west wing instead of the original staircase . Wooden stairs then led to the attic. A city fire on June 12, 1680 destroyed large parts of the building, including the wooden roof structure. The roof, covered with copper and slate, collapsed completely and was replaced by a roof covered with tiles. The gable triangles in the south were given a transverse gable roof, in the inner courtyard a wooden gallery was built on fourteen columns in the baroque style.

Investigations from 1730 onwards showed that the now 400-year-old structure showed considerable damage. The councilors decided to make modifications and repairs. The western side of the building also got its baroque appearance and the magnificent portal to Ossenreyerstraße was added; the façade was plastered until 1750, the copper shields in the gable openings were removed. After a fire near the allowance chamber on December 2, 1782, which did not cause any major damage, the council published extensive fire protection regulations. In 1799 the plaster was renewed for 606 Reichstaler.

The council library moved into the south-eastern rooms on the upper floor in 1822; at the end of the 19th century it moved to Badenstrasse . In 1859 the Provincial Museum for New Western Pomerania and Rügen opened in the east wing of the town hall , where it stayed for 65 years.

From 1881 Ernst von Haselberg undertook extensive renovations on behalf of the city council. The plaster was removed from the show facade and the brick facade was veneered in the neo-Gothic style using bricks from the 19th century .

Detail of the viewing gable

The round arches, the columns between the gables, the cornices and the hall windows of the facade were rebuilt and reinforced. The gable openings were decorated with star disks and the coats of arms of the Hanseatic cities of Bremen , Lüneburg , Hamburg , Lübeck , Wismar , Rostock , Greifswald and of course Stralsund were placed above the windows of the Löwen's Hall .

At the end of the 19th century, the night watch, the fire brigade depot and a police station with six prison cells were located on the ground floor of the town hall in the north east wing, as well as a police station south of the east-west passage known as the butter passage, the north wing was also used by the police and were the registration office and the poor relief office are housed here. The registry office , a police headquarters and the savings bank were located on the ground floor of the south wing in the west wing . In the north wing, the upper floor housed the Löwen's hall, the council chamber, the collegiate hall and a connecting room. This was followed by the offices in the west wing, as well as the offices of the mayor, the finance department and the municipal building office. The museum's collections occupied the east wing.

The basis of the administration building is a four-wing structure on the ground floor with edge lengths of 30 and 70 m. Passages run in north-south and east-west directions; the latter ( butter passage - butter was for sale here ) leads to the west portal of St. Nikolai Church . The department store had 40 shops on the ground floor, which were gradually bricked up or converted. Two low attics and a large cellar served as storage space.

During the main construction period in the 14th century, the builders used red, blue and green glazed bricks with profile edges for decorations. This is visible in several places in the building.

One of the unreinforced limestone pillars has been preserved on the side facing the Old Market.

In the gable of the east-west passage, on Ossenreyerstraße, there is a strikingly designed city coat of arms from the time of the occupation by the Swedes. In the 1990s and also in the first few years of this millennium, the Stralsund town hall underwent another step-by-step comprehensive renovation .

View into the Löwenchen Saal

In the large hall on the north side, with windows facing the old market, the columns were removed in 1752 and replaced with flat arches. The walls were paneled.

The hall is named after the Swedish Governor General Axel von Löwen der Löwensche Saal . Löwen put his collection of books and works of art in this large hall of the town hall and bequeathed them to the city of Stralsund in his will in 1761; they should be freely accessible to everyone. The objects in the collection formed the basis of the Provincial Museum for New Western Pomerania and Rügen in 1859 ; the book collection is in the Stralsund city archive as a special stock .

A competition was initiated in 1960 to redesign the Löwen Hall.

The wine cellar served as a resting place for the city council. The wine cellar was run for the account of the city, from 1757 it was leased, whereby the tenant was obliged to pay the rent and to deliver the Luther drink to the council on the day of the Three Kings . The drink was made with martini ; it consisted of Rhine wine , sugar and spices. The Ratskeller now serves as a restaurant. 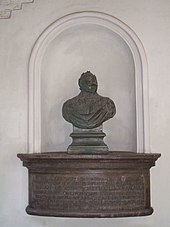 Inside the self-contained system, laid out in four wings, there are two arbor halls and a gallery that extends over two floors. Here you can also find the bust of Gustav II Adolf of Sweden , a gift from the Gustav Adolf Foundation Stockholm from 1930 to commemorate the stay of the Swedish king in Stralsund.

The Stralsund city ​​council and some judicial organs were housed in the Stralsund town hall. In addition, it served in the Middle Ages the trade as a department store (Low German Kophus ) and also offered storage facilities in the basement vault. The city ​​administration and the rooms of the citizens as well as the Stralsund registry office have been located here since the 1990s .