Talloires is a commune Déléguée in the French commune of Talloires Montmin with 1,691 inhabitants (at January 1, 2017) in the department of Haute-Savoie in the region of Auvergne Rhône-Alpes .

Talloires is 447  m above sea level, about 10 km southeast of the city of Annecy (as the crow flies). The village extends on the eastern bank of Lac d'Annecy opposite the headland of Duingt, at the western foot of the limestone massif of the Tournette, which belongs to the Bornes Alps .

East of Talloires the slope rises steeply to the terrace of Vérel (around 750 m). This in turn is dominated by the rugged limestone cliffs of the Dents de Lanfon ( 1834  m ), the Rochers du Varo ( 2053  m ) and the mountain peak of the Tournette, on which the highest point of Talloires is reached at 2351 m. The slopes, which are partly forest-covered and partly criss-crossed by ledges, are subdivided by several short erosion valleys. 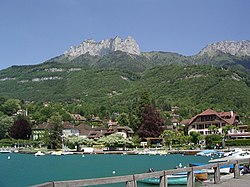 View of Talloires and the Dents de Lanfon

In addition to the actual town center, Talloires also included various hamlet settlements and farms, including:

Neighboring towns to Talloires are Menthon-Saint-Bernard , Bluffy and Alex in the north, Thônes and Les Clefs in the east, Montmin and Doussard in the south and Duingt and Saint-Jorioz in the west.

The former municipality of Talloires was already settled in the Neolithic and Roman times. The place appears for the first time in the documents in the year 866, when King Lothar of Lorraine donated the area to his exiled wife Theutberga and instructed her to set up her residence here. She settled in Talloires and laid the foundation for a small monastery. King Rudolf III of Burgundy left the area of ​​Talloires in 1016 to the Benedictine Abbey of Savigny near Lyon. As a result, the monk Germain von Savigny founded a large church (no longer exists today) and residential buildings for the monks on the site of the previously half-ruined monastery. He became the first prior of the later Talloires monastery. In the course of the Middle Ages, the monastery developed into an important religious center in the region and acquired extensive property through donations from the Counts of Geneva and the Dukes of Savoy. It was made a royal abbey by Pope Clement X in 1674 . During the French Revolution , the abbey was lifted and partially destroyed.

The municipality of Talloires was merged with the former municipality of Montmin with effect from January 1, 2016 and merged to form Commune nouvelle Talloires-Montmin . It belonged to the Arrondissement of Annecy and the Canton of Faverges .

The parish church of Talloires was built in the 18th century. Parts of the old abbey buildings have been preserved; they were rebuilt after a fire in 1631 using earlier structures (capitals from the 11th century). The old priory now houses the cultural center of Tufts University in Boston . At the height above Talloires is the Hermitage Saint-Germain with a pilgrimage church that was built in 1780. It stands on the spot where St. Germain, first prior of Talloires, founded a hermitage in the 11th century. In the center of Talloires numerous houses in the characteristic Savoyard architectural style from the 17th and 18th centuries have been preserved.

In the course of the 19th and 20th centuries, the number of inhabitants decreased continuously due to strong emigration (in 1861, Talloires had 1,183 inhabitants). Since the beginning of the 1970s, thanks to the attractive residential area and the proximity to Annecy, there has been a significant increase in population. Outside the old town center and on the mountain slopes, numerous new single-family houses and villas were built.

Talloires was a predominantly agricultural village well into the 20th century . Today there are some local small businesses. Many workers are commuters who work in the larger towns in the area, especially in Annecy. Thanks to its beautiful location on the lake, the beautiful old town center and the mild climate, Talloires has developed into an important holiday resort in recent decades. Day tourism also plays an important role.

The village is very well developed in terms of traffic. It is located on the main road D909a, which runs from Annecy along the eastern bank of Lake Annecy to Doussard. Further road connections exist with Bluffy and via the Col de la Forclaz with Montmin. The closest connection to the A41 motorway is around 16 km away.