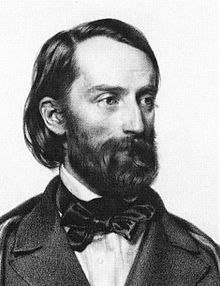 Theodor Hornbostel was the descendant of a family originally from Lower Saxony , with Heinrich Hornbostel mentioned there in a document from 1534–1545, and the son of Christian Georg Hornbostel (1778–1841) and Auguste Friederike Johanne Becker (1787–1842). His cousin was Carl von Hornbostel , his grandson was Erich von Hornbostel .

Hornbostel married Helene Winckler on April 24, 1843 in Vienna (born September 24, 1815 in Vienna; † December 29, 1889 there), the daughter of Johann Daniel Winckler and Viktoria Barbara Kettl. She became known as a women's rights activist who, among other things, co-founded the Vienna Women's Acquisition Association .

Hornbostel became Austrian Minister of Commerce in 1848 and shortly afterwards President of the Vienna Chamber of Commerce in 1849, which he remained until 1851. As director of the “Credit Institute for Trade and Industry” and Vice President of the “Kaiserin-Elisabeth-Westbahn”, Hornbostel was elevated to the Austrian knighthood on November 7, 1860 in Vienna when he was awarded the Iron Crown Order, 3rd class .

Hornbostelgasse in Vienna- Mariahilf (6th district) has been named after him since 1855 .

His grave is on the Matzleinsdorf Evangelical Cemetery (right, 5th cross way, 3rd crypt 36) in Vienna.