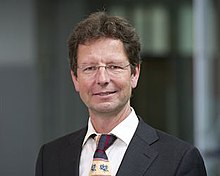 Möllers studied law at the Johannes Gutenberg University in Mainz and the Université de Dijon .

After taking the first state examination in law in Rhineland-Palatinate (Mainz), he wrote a comparative law dissertation with Walther Hadding on the subject of "The bank's liability in the event of loan termination - a contribution to the obligations of conduct when terminating loans in German and American law" from the University of Mainz and as a visiting scholar at the University of California, Berkeley .

During his legal clerkship, Möllers worked as a research assistant for Wolfgang Fikentscher at the Ludwig Maximilians University in Munich from February 1989 . After completing his legal traineeship in Bavaria and an optional position at the Istituto Universitario Europeo in Florence with Gunther Teubner , he passed the second state examination in law in Munich.

In July 1995 he completed his habilitation on the subject of “Protection of legal interests in environmental and liability law. Preventive traffic obligations and easing of evidence in risk situations ”at the Ludwig Maximilians University in Munich. After holding a professorship at the Julius Maximilians University of Würzburg, he was appointed full professor of civil law, business law, European law, international private law and comparative law at the Law Faculty of the University of Augsburg on July 1, 1996 .

His main research interests are German and European civil, capital market and competition law, European company law, comparative law and legal methodology. Möllers has been supervising over 180 doctoral students since 1997, with more than 100 having successfully completed their doctorate. To date, he has published over 400 publications in German, English, Chinese, French, Turkish and Polish on his main research areas. In addition, Möllers has given over 160 scientific lectures at home and abroad.

Möllers has been the spokesman for the Augsburg Center for Global Economic Law and Regulation ( ACELR ) since 2007 . He publishes the series “ACELR - Work on International Business Law and Business Regulation”. He is also co-editor of the Augsburger Rechtsstudien (Nomos-Verlag) and since 1996 managing director of the “ Center for European Legal Studies ” ( CELOS ). He is also a member of the advisory board of the Munich Intellectual Property Law Center ( MIPLC ), a cooperation between the University of Augsburg, the Technical University of Munich , the George Washington University and the Max Planck Society . He is co-editor of the MIPLC series and the Cologne Commentary on the Securities Trading Act .

As part of his research, he also heads the database on German and European business law. This database is intended to provide a comprehensive overview of European and national commercial law and makes the influence of European law on national commercial law visible. The main focus of the database is on capital market and corporation law. But it also contains the most important developments in private and competition law. Well over 1000 data sets and approx. 6000 files give the user access to an extensive inventory of European primary and secondary law as well as numerous national article laws, federal laws and regulations.

Möllers received third-party funding from the Deutsche Bundesbank , the European Union and the “Kurt and Felicitas Viermetz Foundation”, among others .

Since 2009 he has been a permanent member of the “Money and Currency” board of trustees of the Deutsche Bundesbank , and on July 1, 2015, he was unanimously elected chairman of the board of trustees. In addition, Möllers has worked several times as an expert for the European Union , the German Bundestag and the Science Council.

Part of Möllers' international commitment is also the Summer Program , which takes place every summer in Augsburg. This program provides German as well as international students with knowledge of European business law through English-language courses and exercises. In addition, the Möllers chair organizes an exchange program with six US universities ( George Washington University , University of North Carolina at Chapel Hill , Pepperdine University , Santa Clara University , Chicago-Kent College of Law , University of Pittsburgh ) every winter semester . These collaborations enable the students to already acquire points for an LL.M. degree and to study for one semester free of charge at the respective university.