The title of this article is ambiguous. For the further meaning of Trojan or Troyan, see Trojan (disambiguation) . 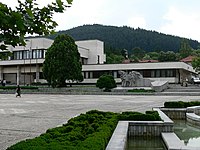 Trojan [ troˈjan ] ( Bulgarian Троян ) is a city and administrative center of a municipality of the same name in northern Bulgaria . It is located in Lovech Oblast and is also the second largest city in the region.

Trojan is located on the northern slopes of the Balkan Mountains , in the so-called pre- Balkans , on the banks of the Beli Ossam River. The city is located about 160 kilometers northeast of the capital Sofia and 35 kilometers south of Lovech . To the southwest of Trojan lies the Trojan Pass (1525 m above sea level, Bulgarian Троянски проход; Trojanski Prochod), through which Karlovo (70 kilometers away) and Bulgaria's second largest city, Plovdiv (120 km), can be reached. There are road connections to the north to Lovech, Teteven and Sevlievo , and to the east to Aprilzi .

Trojan is the terminus of the Levski - Trojan railway line .

The region around Trojan is influenced by a temperate continental climate. The precipitation is slightly above average in the country comparison. Due to the mountainous location, rain fronts often accumulate for a longer time, especially in spring. There is a closed snow cover in Trojan about 50 days a year.

The annual average temperature is 10.2 ° C, the annual rainfall an average of 610 mm.

Trojan is the administrative center of the municipality of the same name, Trojan, in which a total of 22 places are incorporated. The area of ​​the municipality is 893 km², on which 37 712 inhabitants live. Thus only about half of the community population lives in the core city of Trojans.

Archaeological finds show that the region was inhabited as early as the Paleolithic . During the Bronze Age , the Thracians settled in the region - on the Asamus River (now Ossam ). Many finds of bronze and ceramic vessels, iron weapons and jewelry date from this period.

As a fully-fledged settlement, Trojan was built in the 15th century as a way station (Wegsiedlung) at the entrance to the Trojan pass . The city got its name from the name of the street: Via Traiana (see Roman road ). This street connected in the 1st / 2nd Century AD. Oescus or Novae on the Danube via Trojan, Philippopolis (Via Militaris) the Rhodope Mountains to Via Egnatia on the Aegean Sea .

At the beginning of the Turkish rule, Bulgarian resettlers from the Danube plains and from the region of Tschirpan , Berkowiza , Raslog and Ohrid settled here . In the first half of the 19th century, crafts flourished in Trojan, especially pottery, from which the unmistakable Trojan ceramic school emerged.

The first electric light bulb burned in Trojan in 1911. This made the city the third electrified city in Bulgaria after Sofia and Plovdiv.

The city has been namesake for Troyan Peak , a mountain on Livingston Island in Antarctica , since 2002 .

In 2018 the city celebrated its 150th anniversary. For the anniversary, there were more cultural events such as children's parties.

A special ceramic is produced in the city , which is very popular with tourists. The city is also known for its plum brandy. Culturally, the numerous museums in the city are particularly worth mentioning. In addition to a arts and crafts museum, there is also a national exhibition for crafts and applied arts and a small art gallery. The community operates eight churches, including St. Paraskeva's Church and the restored Nunki complex with architecture typical of the region. Ten kilometers south-east of Trojan lies Bulgaria's third largest monastery with old frescoes and a valuable library, which is a popular pilgrimage destination because of an icon of the three-handed Virgin.

The economic performance around Trojan is, as in the whole of Northern Bulgaria, developed rather below average compared to the country. There are still a few larger companies, such as the bed accessory manufacturer Kalinel, which supplies IKEA, among others. Tourism also plays an important role in economic performance.