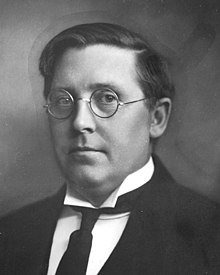 Tryggvi Þórhallsson (born February 9, 1889 in Reykjavík , † July 31, 1935 ) was an Icelandic politician of the Progressive Party (Framsóknarflokkurinn) and Prime Minister of Iceland .

Tryggvi Þórhallsson, who obtained his university entrance qualification (stúdentspróf) in 1908 at Menntaskólinn í Reykjavík , the oldest grammar school in Iceland, then studied theology at the University of Iceland, like his father Þórhallur Bjarnarson, who was bishop of Iceland from 1908 to 1916 ( Íslands), which he graduated in 1912. He then worked for a year as a religion teacher in Reykjavík , before working as a priest in Hestur and Borgarfjörður from 1913 to 1917 . Between 1916 and 1917 he was also a professor of theology at the University of Iceland. Then he was editor-in-chief of the daily newspaper "Tíminn" for ten years until 1927.

His political career began in 1923 as a candidate for the Progressive Party (Framsóknarflokkurinn) with the election of a member of the Althing , to which he belonged until 1934 as a representative of the Strandasýsla district .

On August 28, 1927, he succeeded Jón Þorláksson as Prime Minister of Iceland and as such formed the first government led by the Progressive Party until June 3, 1932, of which he was also chairman in 1927. During his reign he took over the office of Minister of Industry (atvinnumálaráðherra) until April 20, 1931 and then again from August 20, 1931. In addition, he was from December 8, 1928 to March 7, 1929 Minister of Finance (fjármálaráðherra) and between April 20 and August 20, 1931 Minister of Justice and Church (dóms- og kirkjumálaráðherra). As Prime Minister, he was also responsible for overseeing foreign affairs, as Iceland, as part of Denmark, did not have an independent Foreign Ministry. After the earthquake that destroyed large parts of Dalvík in 1934 , as Prime Minister he organized an aid committee to repair the damage. In addition, during his term of office there were extensive statutory subsidies for urban construction measures.

On June 3, 1932, his party friend and brother-in-law Ásgeir Ásgeirsson followed him as Prime Minister and Chairman of the Progress Party. He himself was then until his death chairman of the board of Búnaðarbanki Íslands founded on July 1, 1930 .