Jón Þorláksson (* 3. March 1877 in Vesturhópshólar vestur-húnavatnssýsla ; † 20th March 1935 in Reykjavík ) was an Icelandic politician of the Conservative Party (Íhaldsflokkurinn) and the consequential Independence Party (Sjálfstæðisflokkur) and Prime Minister of Iceland .

Jón Þorláksson came from a farming family from Vesturhópshólar in Húnavatnssýsla in northwest Iceland , who, like his two sisters and brother, were very talented. His sister Björg Þorláksdóttir was the first Icelander to receive a doctorate in 1926 , which was awarded to her by the Sorbonne .

Jón himself acquired his university entrance qualification (Stúdentspróf) in 1897 at Menntaskólinn í Reykjavík , the oldest grammar school in Iceland, as the best in class and with the highest average grade ever achieved there. Following this, he completed a study of civil engineering at the Polytechnic School of Copenhagen , where he graduated 1,903th On his return, he was appointed Chief Engineer of Iceland in 1905 and as such oversaw the construction of roads and bridges until 1917 and advocated the construction of hydroelectric power stations and the use of abundant geysers to heat residential buildings. In 1917 he left the public service and on the one hand founded a company for the import of building materials, but on the other hand worked as an independent engineer for several construction projects.

Jón began his political career in 1921 when he was elected as a member of the Althing on a list that formed an antipole to the previously founded Socialist Party. Soon after, he, more respected than popular, became leader of the Conservative and Liberal MPs in Parliament. This gave rise to the Conservative Party (Íhaldsflokkurinn) in 1924, of which he became chairman. On March 22, 1924 he was appointed Minister of Finance (Fjármálaráðherra) by Prime Minister Jón Magnússon in his cabinet, which was in office until July 8, 1926. During this period in 1925 the exchange rate of the Icelandic krona rose far more than the exchange rate ( gold standard ) of the British pound initiated by Chancellor Winston Churchill .

After the sudden death of Prime Minister Jón Magnússon on June 23, 1926, he succeeded him as Prime Minister of Iceland and at the same time kept the post of finance minister in a cabinet that only consisted of Industry and Justice Minister Magnús Guðmundsson . After the election defeat of the Conservative Party in the Althing elections in 1927, Tryggvi Þórhallsson replaced him from the Progressive Party. Jón himself became opposition leader in parliament and became its first chairman in 1929 after the Independence Party (Sjálfstæðisflokkur) formed from the merger of the Conservative Party and the smaller Liberal Party .

He was also Mayor of Reykjavík from 1932 until his death . Due to his poor health, he resigned as chairman of the Independence Party in 1934 and was as such his previous deputy Ólafur Thors . 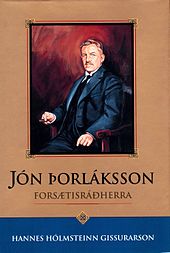 As prime minister as well as opposition leader, he represented classical liberal ideas, which he based on economic policy questions essentially on the thoughts of the well-known Swedish professor of economics Gustav Cassel . In a magazine article from 1926, he distinguished between conservative and radical ideas on the one hand and libertarian and authoritarian ideas on the other. He argued that these two types of opinion could exist in any of the four combinations, so that the left-wing or socialist parties, for example, are both radical and authoritarian, while on the other hand, libertans must be radical at times. In his view, however, they should be conservative at the time because their essential task was to preserve freedom from the battles won in the 18th and 19th centuries and to defend that freedom against socialism. Because of this, he called himself a conservative libertarian. In a speech to the General Assembly of the Conservative Party in 1929, he showed briefly but clearly that the classical liberal ideas of people by working out their own personal interests in a competitive environment unintentionally serve the interests of the general public. He also called for free trade and a limited government. In public he therefore also called for the privatization of two state- owned commercial banks. During the global economic crisis that began immediately afterwards in 1929 and later during the Second World War , the Independence Party did not follow his political ideas. It was only Davíð Oddsson , Iceland's Prime Minister between 1991 and 2004, who again referred to Jón Þorláksson's intellectual legacy in terms of privatization, liberalization and stabilization of the Icelandic economy.