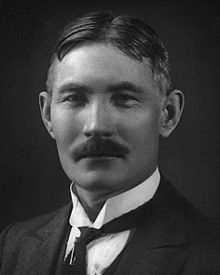 Einar Arnórsson (born February 24, 1880 , † March 29, 1955 ) was an Icelandic politician of the Independence Party (Sjálfstæðisflokkur) and Prime Minister of Iceland .

After attending school, he completed a law degree at the University of Copenhagen , which he completed in 1906 with a graduation . After his return he initially worked as a journalist and as such in 1907 was editor-in-chief of the daily newspaper Fjallkona ( Bergfrau ), which appeared until 1911 . This was followed by an appointment as professor of law at the University of Iceland (Háskóli Íslands) until 1915 .

His political career began in 1914 with his election as a member of the Althing , in which he initially represented the interests of the old independence party until 1919. On May 4, 1915, he succeeded his party friend Sigurður Eggerz Prime Minister of Iceland (Ráðherrar Íslands). He held this post as the last prime minister within the framework of self-government from the Danish motherland for almost a year and a half until January 4, 1917, and then handed it over to Jón Magnússon , the first prime minister of an independent state of Iceland, which was signed by the treaty of December 1, 1918 detached from Denmark , but was subordinate to a common king ( Christian X. ).

He then returned to the University of Iceland as a law professor and held the chair until 1922. During this time he was also rector of the university from 1918 to 1919. At the same time he worked as a journalist again and from 1919 to 1920 editor of the newspapers Ísafold and Morgunblaðið . Between 1922 and 1928 he was Iceland's first tax commissioner (Skattstjóri). Between 1929 and 1930 he was again rector of the University of Iceland. In 1930 he became the publisher and editor-in-chief of Skírnir - Tímarit Hins íslenzka Bókmenntafélags magazine .

Between 1931 and 1932 he was again a member of the Althing, where this time he represented the interests of the Independence Party (Sjálfstæðisflokkur) founded in 1929 . The reason for his resignation from parliament in 1932 was his appointment as a judge at the Supreme Court ( Hæstiréttur ), of which he initially belonged until 1942. From 1936 to 1939 he was also the editor of Blanda magazine . On December 16, 1942 he was appointed by his old college friend and current Prime Minister Björn Þórðarson as Minister of Justice and Education (Dómsmála- og Menntamálaráðherra) in his cabinet, to which he belonged until September 21, 1944. After leaving the government, he returned to the Supreme Court as a judge until 1945. Later he was editor of the newspaper Saga from 1950 to 1954 and from 1951 to 1953 by Tímarit lögfræðinga .

His eldest daughter Ingibjörg Einarsdóttir, born in 1908, married the writer and later Nobel Prize winner for literature Halldór Laxness in 1930 , from whom they divorced in 1944.