This article deals with the Prime Minister of Iceland; on the agronomist and member of the Althing see Hermann Jónasson (agronomist) . 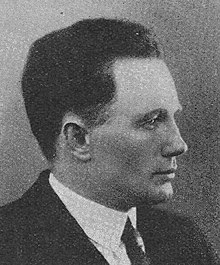 Hermann Jónasson (born December 25, 1896 , † January 22, 1976 ) was an Icelandic politician of the Progress Party (Framsóknarflokkurinn) and two-time Prime Minister of Iceland .

Professional career and Prime Minister from 1934 to 1942

Hermann Jónasson obtained his university entrance qualification (Stúdentspróf) in 1920 at Menntaskólinn í Reykjavík , the oldest grammar school in Iceland. He then completed a law degree , which he completed in 1924. He then worked as a lawyer and was most recently admitted to the Supreme Court ( Hæstiréttur ) as such . In the meantime he was also deputy bailiff of Reykjavík from 1924 to 1928 and from 1929 to 1934 police chief (Lögreglustjóri) of the capital. As such, he established the capital's modern police system.

His political career began in 1934 as a candidate for the Progressive Party (Framsóknarflokkurinn) with the election of a member of the Althing , of which he was a member until 1967. As a member of parliament, he was Iceland's representative in the Parliamentary Assembly of the Council of Europe between August 7 and November 18, 1950 and from May 26, 1952 to April 24, 1967 .

On July 28, 1934, he succeeded Ásgeir Ásgeirsson as Prime Minister of Iceland and took over the office of Minister of Justice (Dómsmálaráðherra) in his cabinet, which was in office until May 16, 1942, and also that from November 18, 1941 to May 16, 1942 of the Minister of Agriculture (Landbúnaðarráðherra). In the years before the beginning of the Second World War he was exposed to permanent pressure from the German Empire and the United Kingdom because of Iceland's diplomatic stance . 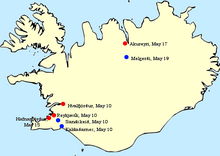 Map of the British invasion of Iceland in 1940

After the beginning of the Second World War, the occupation of Denmark by the German Wehrmacht at the beginning of April 1940 led to a strain on relations between the Icelandic and the German Reich, with the result that Iceland itself now asserted the foreign interests that Denmark had previously represented had to. A few weeks after the occupation of Denmark, Iceland was occupied on May 10, 1940 by the armed forces of the United Kingdom .

On May 16, 1942, Ólafur Thors of the Independence Party succeeded Hermann in the office of Prime Minister.

In the next few years Hermann was one of the leading politicians of the Progress Party, which, however, spent most of it in the opposition . In 1944 he was also elected chairman of the Progressive Party. On May 14, 1950, he again took over a government office as Minister of Agriculture in the coalition government of his party friend Steingrímur Steinþórsson and held this office until Ólafur Thors took over government on September 11, 1953.

On July 24, 1956, Hermann Ólafur replaced Thors as Prime Minister of Iceland and formed a coalition government consisting of the Progress Party, the People's Alliance (Alþýðubandalag) and the Social Democratic Party (Alþýðuflokkurinn) , which held a majority of 32 of the 52 mandates in the Althing until December 23, 1958 . The coalition between the Progressive Party and the Social Democratic Party already existed before the parliamentary elections as part of an electoral alliance known as the fear alliance (Hræðslubandalagið). In his cabinet he also took over the offices of Minister of Justice and Agriculture. This cabinet was the first left-wing government in Iceland, but it ran into difficulties from the start. As Prime Minister, he called his country's stay in NATO necessary, but called for the early withdrawal of US forces stationed in Iceland, which led to distrust on the part of the United States and the other member states of NATO . Nonetheless, he tried to find a compromise with NATO. For these reasons, his government failed after almost two and a half years in office, so that on December 23, 1958, with the minority cabinet of Emil Jónsson and the subsequent fifth government of Ólafur Thors, the long-term coalition of the Independence Party and the Social Democratic Party, known as the “government of reconstruction”, began . In 1962, Hermann finally resigned as chairman of the Progressive Party and handed this office over to Eysteinn Jónsson .

His son Steingrímur Hermannsson , who succeeded him as a member of the Althing in 1967, was later also Prime Minister of Iceland.

More than 30 years after his death in 2007, after several years of legal proceedings based on a positive DNA analysis, it was established that the lawyer Lúðvík Gizurarson is an (illegitimate) son of Hermann Jónasson.