The theater emerged from the Society for Art and Literature that had been established ten years earlier . The manufacturer's son Konstantin Sergejewitsch Stanislawski first appeared as an actor on their amateur stage and also took on directing work. In the program, the classics predominated: in addition to the works by Molière , Shakespeare and Schiller , Ostrowski's dramas were performed in particular . The impetus for founding a professional theater came from Stanislavski's meeting with the dramaturge Vladimir I. Nemirowitsch-Danchenko. The newly founded Art Theater ( Московский художественный театр - MCht) quickly gained notoriety when it performed the four main works by Alexei Tolstoy , starting with Tsar Fyodor Joannowitsch . However, the theater had its first resounding success with the play The Seagull by the Russian playwright Anton Chekhov , which had previously failed in St. Petersburg. 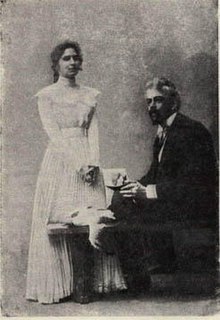 The art theater played the international drama of realism and naturalism. In addition to the plays by Henrik Ibsen and Gerhart Hauptmann , the repertoire was based in particular on the plays by Chekhov, who only became known as an author of plays through this. Uncle Wanja was premiered at the Art Theater in 1899, followed by Three Sisters in 1901 and The Cherry Orchard in 1904.

In 1902 the Russian writer Maxim Gorki could be won as a staff member. His play Night Asylum - Scenes from the Deep was premiered in 1902 by Stanislawski. In 1905, children followed the sun . Thanks to Konstantin Stanislawski's directorial work and the excellent ensemble, the theater acquired the reputation of an avant-garde stage for contemporary drama across Europe.

By 1905 Stanislawski's psychological realism was perfected, but threatened to freeze. The establishment of various studios was supposed to bring new ideas for artistic work. In 1905 the former art theater actor Vsevolod Emiljewitsch Meyerhold , who had meanwhile caused a stir with anti-realistic productions, founded such a studio. However, it only existed for a year because of differences with Stanislavsky. Meyerhold then went his own way and became a famous director. Other studios, including the later important director Yevgeny B. Vakhtangow , lasted for a long time and revived the work of the art theater . In particular, Vakhtangov's production of Carlo Gozzi's Princess Turandot was an outstanding success. Another attempt to expand the artistic spectrum were Stanislawski's efforts, which began in 1908, to win over the English theater reformer Edward Gordon Craig . Craig's 1912 production of Hamlet became legendary, but it also made it clear how far his artistic ideas were from those of Stanislawski.

Stanislawski himself was also looking for new paths as a director. In 1908 he staged Maurice Maeterlinck's symbolist fairy tale The Blue Bird . The production was a worldwide success. Stanislavski also sought contact with avant-garde painters and entrusted Alexandre Benois , the leading stage and costume designer of Djagilev's Ballets Russes, with the direction of the set-up. In 1916, however, he separated from Benois because he feared that theater work might suffer from "the superiority of the decorative".

Immediately after the October Revolution, the ensemble embarked on an extensive tour abroad. After his return, Stanislavski mainly worked as an opera director. The artistic theater was elevated to the status of an academic state theater ( Московский художественный академический театр - MChAT) and thus placed on an equal footing with the former imperial theaters. In the 1930s, socialist realism became the binding and normative aesthetic in the Soviet Union, and Stanislavski's theory of acting and his method of directing became the norm in Soviet theatrical art. Even the art theater could not be completely saved from freezing. The productions, some of which had been preserved for decades (such as Maeterlinck's The Blue Bird ), were barely permeated by the spirit that had originally made Stanislawski's work so exciting.

From 1970 to 2000 the theater was directed by Oleg Yefremov . The art theater was one of the first to deal with the problems of perestroika in the USSR. In 1987 the ensemble split up and founded an art theater association ; Oleg Yefremov directed the ensemble that played in the historic building. A second ensemble, under the artistic direction of Tatiana Doronina, worked on Tverskaya Street , just a few blocks northwest of Red Square .

From 2000 until his death in 2018, Oleg Tabakov headed the art theater , whose emblem is a seagull (after Chekhov's eponymous drama). The theater has had its current name since 2004.

The art theater became known throughout Europe through a fundamental theater reform by Stanislawski and was relevant for the development of the art of acting beyond the borders of Russia. Stanislawski fought against the hitherto common declamation theater and virtuosity and demanded a realistic-psychological game that aimed at the truthfulness of expression. This should be achieved through the actor's full empathy for the role. Instead of sloppily rehearsed performances, there were carefully crafted productions in the art theater and instead of traveling stars, a balanced ensemble play. These foundations of theater work go back to the principles of the Meininger , whose reformist approaches were also known in Russia through guest performances. Parallel to the development of theater directing in Germany - with Otto Brahm and Max Reinhardt , for example - a modern understanding of directing and ensemble theater arose in the Moscow Art Theater. In theoretical considerations, Stanislawski also turned to the management and training of actors, which later led to a large-scale, albeit not completed "system" of the art of acting and which are still fundamental to the training of actors - especially in the Anglo-Saxon region. In New York's famous actors studio, Lee Strasberg trained Hollywood actors using Stanislawski's method; in Prague, the director Otomar Krejca staged Stanislawski style, and the famous Three Sisters production by Peter Stein , which he brought out in 1984 at the Schaubühne on Lehniner Platz , was entirely in the tradition of the great Russian theater man and lived from the identification of the Actors with their characters.

The guest performances of the Moscow Art Theater had an impact on the development of European drama and theater at the beginning of the 20th century that should not be underestimated. In 1906, for example, Stanislawski's ensemble was a guest in Berlin for three weeks. First a Tolstoy was on the program, in which the after-effects of the Meininger were still clearly felt. The Art Theater also showed Gorky's night asylum , Chekhov's Three Sisters and Ibsen's enemy of the people . However, Chekhov's uncle Vanya became the highlight of the guest performance . Audiences and critics cheered. The intensity of the game and the direction that brought together all the elements of the theater amazed and inspired the Berliners. The guest performance was a first-rate social event that was attended not only by German directors, actors, playwrights, scientists and critics, but even by the Kaiser. The playwright Gerhart Hauptmann said of Uncle Wanja : "That is the very strongest of my scenic impressions. It is not people who play, but artistic gods." Hauptmann stated that he had always wanted this type of representation for his dramas. And the theater critic Alfred Kerr wrote: "The Russians have become a new standard for us (...) the direction has, according to them, to change its work, the criticism to change its judgment." The Meininger principles, which had shaped the director Stanislawski ten years earlier, returned to Germany in a modernized and refined form through his directing work, which in turn fascinated and inspired theater people and dramatists.

Last but not least, Anton Chekhov became known throughout Europe through these trips, even if Stanislawski's atmospheric and melancholy view of his pieces did not always correspond to the intentions of the author, who repeatedly emphasized that his pieces were comedies .