Along with Savaiʻi, Upolu is one of the two main islands of the Independent State of Samoa in the South Pacific. The largest city on the island is the capital Apia on the north coast of the island.

Vegetation in the interior of the island

The island used to be a large basalt volcano that is now completely overgrown. The entire island is surrounded by a coral reef. In the east of the island is the 56 meter high Fuipisia waterfall . The O Le Pupuʻe National Park on Upolu is one of the few national parks in the Pacific region. In it lie the peaks of the double-cratered mountain Le Pu'e and Mount Fito , at 1,113 meters the highest point of Upolus. The west of Upolus consists largely of white sand and black rocks: Here is also the Return to Paradise beach , which was named after the film of the same name with Gary Cooper . There are extensive, protected mangrove forests in the southwest of the island .

According to legend, Upolu got its name from the first woman who lived on this island. The island was discovered for Europe in 1722 by the Dutchman Jakob Roggeveen . He gave it the name "Groningen" after the Dutch city ​​of Groningen . At the end of the 18th and beginning of the 19th century, the island was also called Ojalava or Ojolava .

At the end of the 19th century, Robert Louis Stevenson lived on the island. He managed the Vailima - plantation until his death in 1894. The Vailima plantation was the official residence of the German used the governor after 1899 Upolu part of Year colony German Samoa had become. During the First World War , the island was occupied by Great Britain and later transferred to New Zealand along with the other western Samoa Islands . On March 19, 1927, the second independence movement of the Mau a Pule was founded on the island against the foreign rule of New Zealand. 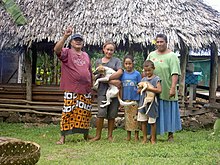 The main airport is Faleolo International Airport in the northwest. Fagali'i (IATA code: FGI ), 5 km east of Apia, is only approved for regional flights.

Inside the island there is a Baha'i Temple , with a monumental dome and imposing buildings around it .

Islands of the Samoan Islands