A train of the Vorarlberg S-Bahn in Schruns station 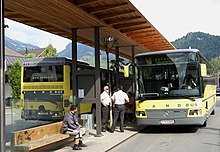 The transport association unites all companies active in the field of local public transport in Vorarlberg, excluding the Kleinwalsertal . It also includes cross-border traffic (mostly only for certain routes) to the neighboring towns of Lindau , Scheidegg , Niederstaufen and Oberstaufen (all in Germany) as well as St. Margrethen (Switzerland) and St. Anton am Arlberg in the neighboring state of Tyrol.

The transport association is based on a four-pillar model:

The slogan used is “Vorarlberg Mobil - different on the way” .

The services are ordered, coordinated by the transport association, either by individual municipalities (e.g. Stadtbus Dornbirn , Ortsbus Götzis , ) or by municipal associations ( Landbus Unterland , Landbus Bregenzerwald , and others). Regardless of the line operator (such as Postbus , various private companies, and others), all buses, stops, and the like are kept in a uniform design, with regional color variations. Intercity bus routes are always yellow. The city buses are painted in different colors to make it easier to differentiate and recognize them (Dornbirn red, Bregenz blue, Kummaregion green etc.).

The trains of the ÖBB and the Montafonerbahn (mbs) are integrated into the Vorarlberg transport association. In order to achieve a uniform appearance here too, the ÖBB 4024 railcars were labeled with the S-Bahn Vorarlberg label.

The transport association was founded in 1991 and eight years later on August 26, 1999 officially registered as VVV GmbH.

The current form is based on the Vorarlberg  2006 “Mobil im Ländle” traffic concept , which was created on behalf of the state government. In this concept, the guidelines for local public transport and its interaction with the other transport components, as well as with the local transport regions of the surrounding countries, were developed.

Transport companies in the VVV