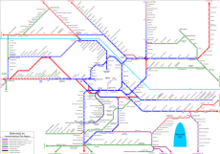 Public transport in Vienna - core zone Vienna of the VOR

The Transport Association Eastern Region (VOR) mbH is a service in the public transport in the eastern region of Austria ( Vienna , Lower Austria and Burgenland ).

Its task is to coordinate timetables and tariffs as well as to order services for local trains and regional bus routes in this area .

The VOR was founded with a partnership agreement on September 4, 1974. The first entry in the commercial register took place on November 5, 1974 and actually went into operation on June 3, 1984. The company is registered with the Commercial Court of Vienna under company register number 117218f. The shareholders are the federal states of Vienna , Lower Austria and Burgenland . Vienna and Lower Austria each belong to 44%, and 12% to Burgenland.
The company has a paid-in capital contribution totaling 100,000 euros.

From 2003 there were considerations to merge the Verkehrsverbund Ost-Region with the Verkehrsverbund Niederösterreich-Burgenland (VVNB). In 2005, VOR took over the management of the VVNB. In 2008 the design was revised. In December 2010, the decision was made to merge the two associations. In the new network area, instead of the ring-shaped zone system (VOR) and the kilometer-based tariff group system (VVNB), a uniform honeycomb system should apply. The start was planned for the period between summer 2012 and summer 2013, but was postponed and announced at the beginning of 2013 for “at the latest by early 2014”, whereby now unspecified “smaller, fairer tariff units” were mentioned instead of the existing outer zones.

On July 6, 2016, the merger of the transport associations VOR and VVNB actually became a reality - with a completely different tariff system than originally planned.

A supervisory board has been set up at this limited liability company . The Supervisory Board currently has eight members:

The managing directors are Wolfgang Schroll and Karin Zipperer.

The following companies are in the VOR:

Since July 2018, VOR has also been coordinating the eleven Wieselbus lines, which run in a star shape from Vienna and the four quarters of Lower Austria to the capital St. Pölten .

The City Airport Train , the Regiojet and the trains of WESTbahn Management GmbH are not included in the VOR tariff system, and neither are railway lines with purely tourist transport options , such as the Wachaubahn , Waldviertlerbahn , Reblaus Express and Schneebergbahn .

The tariff area was divided into zones, which were grouped around Vienna. The entire area within the city limits, partly also a little further, represented zone 100 or core zone . The outer zones had three-digit numbers, the hundreds of which increased with increasing distance from Vienna. The scheme of the tens was based on the line scheme of the Viennese tram . The units digit was often zero, in some cases other digits were used to differentiate between different zones.

A maximum of eight zones had to be paid for, even if more zones were used (directly). In order to enable approximately the same fares for the same routes, the zones partially overlapped, so that one zone less had to be paid.

The network area included the whole of Vienna, parts of Lower Austria and northern Burgenland, as well as the railway lines to Sopron . In Austrian territory, the VOR was completely enclosed by the Lower Austria-Burgenland Transport Association (VVNB). Many of the rail sections of the VOR extended into this (VOR branch lines). Conversely, the VVNB tariff was valid on numerous lines located in VOR if the journey began or ended in the VVNB network area.

Driving in a zone last - without interruption except to change trains - cost 2.20 euros with tickets available in advance or from machines . A surcharge of 10 cents was charged directly in the tram trains and buses of Wiener Linien as well as in the local railway Vienna – Baden, not on regional bus routes. On many rail lines in the VOR, a ticket had to be and must be purchased before the start of the journey. In the past, tickets were also sold on the train for an extra charge. For some groups of people (children and young people, basic military service, pensioners, etc.) there were and are half-price tickets at a price of 1.10 euros.

The prices for weekly, monthly and annual tickets were different in Vienna and in the outer zones. Some special tariffs such as the “8-day climate card” were and are only valid in Vienna.

Within the tariff area of ​​the VOR, individual means of transport could and can, under certain conditions, also be used at an internal tariff of the transport company concerned (e.g. trains of the ÖBB ), which is sometimes cheaper. The VOR tariff was and is also valid in the 2nd class of long-distance trains with the exception of those of the WESTbahn, which was only a member of the VOR for a short time.

On July 6, 2016, the network areas of the VOR and the VVNB were combined and a new, uniform tariff system was introduced. In the outside area (former VOR external zones plus former VVNB area) there are no longer any zones or other subdivisions. What remains is the Vienna core zone (previously also known as “Zone 100”). The tariffs for the core zone and the outside area were completely decoupled with the reorganization, there are no longer any overlapping areas into Vienna. In the outer area, the pricing and planning of the scheduled traffic is the responsibility of VOR GmbH, in the core zone the Vienna public transport company is responsible.

In the core zone , the previous Vienna tariff system and range of tickets remained in effect.

In the outdoor area (officially "region") a route tariff is applied, whereby the single journey tariff was initially made up of sections of 2.20 (former zone tariff) and 1.10 euros each, or a minimum price of 1.70 euros applied. Discounted local tariffs still exist in some municipalities. There are also route-related day tickets.

Time cards for the outside area are valid in an algorithm-generated “personal network” which, depending on the relation, contains one or more routes to the destination and also includes some lines surrounding the route (s). The information about the “personal network” is only available online.
In the case of season tickets for the outside area in combination with Vienna, there is not only the "core zone Vienna" and the cheaper "regional zone Vienna", which includes the railway lines within Vienna and the regional bus lines in the Vienna section. (Season ticket in this context means weekly, monthly and annual ticket, but not day ticket.)

Tickets are available online (VOR, ÖBB), via app, from ÖBB ticket machines in the train stations, from counters and from regional bus drivers. Single tickets purchased from bus drivers are valid for immediate commencement of the journey, while otherwise the departure date and time can be selected. Originally, the journey had to be started immediately at the specified departure time, since January 1, 2018, there has been a margin of 2 hours within which the journey must take place.

Holders of a Vorteilscard Senior receive single tickets or day tickets for the region at a 40% discount according to the VOR senior tariff (which already exists in the VVNB, was newly introduced in the VOR); in the core zone, the Vorteilscard Senior is not a prerequisite for claiming the senior discount.
The other Vorteilscards only entitle you to use the ÖBB , Raaberbahn , Wiener Lokalbahnen trains (also for journeys within Vienna), Mariazellerbahn or Citybahn Waidhofen for discounted tickets in accordance with the house tariff of the respective railway company. In addition, tickets according to the ÖBB tariff are generally valid for all train stations in Vienna.

That with the slogan “Simply. Fair. Flexible. Practically. Proven. ”The new tariff system advertised also received criticism from many sides. Because the tariff reform led to significant increases in the price of annual tickets for commuters, which is why numerous complaints made it possible to apply for a cost subsidy for the first and second year. Seniors saw themselves at a disadvantage when comparing the tariffs with Vorteilscard Senior / Classic because of the higher fares in some cases for train journeys, in particular because they also have to pay extra for rail routes in the core zone. In addition, due to the dismantling of the validators in the outdoor area, there were complaints about incompatibilities with tickets for the core zone, which also affected senior citizens, whereupon validators were set up again in March 2017 within a radius of 50-60 kilometers from Vienna. The lack of transparency in pricing and “personal networks” as well as various inconsistencies were also criticized.

The means of transport operated in the Verkehrsverbund Ost-Region are numbered according to the following line system:

Initially, the Wiener Elektro Stadtbahn , which existed until 1989, was also integrated into the VOR, but its last two lines retained their traditional G and GD line signals until the end.