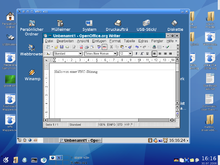 Virtual Network Computing , or VNC for short , is software that displays the screen content of a remote computer ( server ) on a local computer ( client ) and, in return, sends keyboard and mouse movements from the local computer to the remote computer. With it you can work on a remote computer as if you were sitting in front of it. VNC implements the Remote Framebuffer Protocol and, in contrast to other remote maintenance software , can be used independently of the platform .

VNC was developed in the Olivetti Research Laboratory ( ORL ). The research laboratory was founded in 1986 with Andy Hopper as director, acquired by AT&T in 1999 and closed in 2002. The original developers of VNC founded RealVNC in 2002 . VNC's project manager was Andy Harter , and Tristan Richardson created the architecture and protocols of VNC, as well as reference implementations for Unix and Java .

VNC has been published as open source since 1998 . The original VNC is under the GNU General Public License . RealVNC published its basic Remote Framebuffer Protocol in a Request for Comments from March 2011.

There are many forks from VNC that contain various improvements and additional functions, but are largely compatible with the original version and support its network protocol as the "lowest common denominator". There are implementations for all common operating systems , so VNC is considered platform-independent .

VNC works on the client-server model . The server program offers screen outputs and input options using a mouse and keyboard, which the client program can display and use.

The term virtual in VNC comes from the fact that it can be viewed as a virtual replacement for thin clients .

With VNC it is possible, for example, for the administrator of a network to take control of an employee's computer in order to install software or to correct errors. However, VNC can also be misused as spy software . Many implementations allow it to be used inconspicuously to the user of the monitored computer. The use of VNC software can also be secured to the same extent: The Windows version of the RealVNC server shows in the task bar with a white icon that the server is running. This turns black as soon as a viewer connects to the server, so that the user of the computer on which the server is running can notice this. Many implementations also offer the option of querying passwords when establishing a connection (not provided for in the RFP standard) or obtaining a declaration of consent from the user of the computer to be monitored to establish a connection in a dialog box displayed on the computer to be monitored. Alternatively, a “read-only” mode is also possible, in which local entries in the viewer have no effect on the remote VNC server computer.

Since the remote framebuffer protocol is unencrypted, all keyboard entries of the viewer are also sent unencrypted over the network. When entering sensitive data (e.g. passwords ), as with any other network protocol, there is a risk of data being spied on. To secure the connection, there is therefore the option of SSL encryption of the transport layer, similar to HTTPS, and the VeNCrypt encryption protocol , which has been specially optimized for VNC.

The most popular VNC programs that have both a client and a server are:

Xvnc provides two different servers: on the one hand, the X server, in which the preset window manager (e.g. Gnome or KDE ) is started, and on the other hand, a VNC server that can be accessed by the client . Due to the technology of the Unix X server, it is possible to start several Xvnc instances on one computer.

The VNC server is usually not started directly via Xvnc, but via the supplied Perl script vncserver.

Xvnc is an integral part of almost all VNC servers running on UNIX systems.

Thanks to its enormous popularity, the VNC protocol is used to increasingly, multi-head -enabled graphics cards to simulate. For this purpose, a computer runs with special "multi-monitor software" that usually provides a virtual VNC server. From the second computer, whose monitor you would like to use as an extension to the first, a normal VNC client is sufficient to connect to the virtual VNC server. The monitor content of the other is then not displayed, but the correspondingly simulated virtual extension part.